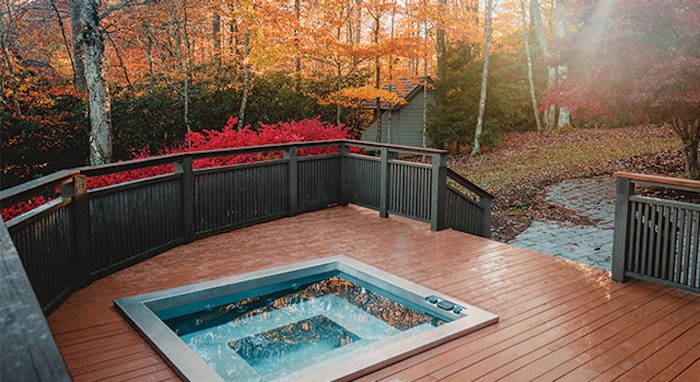 Like every segment of the pool and spa industry, the spa business is booming. Dealers and installers report needing to put customers on installation wait lists that stretch into 2022, and the frantic pace of this summer shows no signs of abating.

It would be easy to rush jobs just to squeeze more projects into ever- tightening schedules, but the long-term viability of a customer relationship depends on taking your time and treating each project as if it were the only one on the docket.

In other words, "Don't build anything you wouldn't put in your own house," cautions Dan Hayes, owner of Luxury Mountain Pool and Spa in Idaho Falls, Idaho, who installs high-end custom units from Diamond Spas and Bradford Spas in resort communities like Big Sky, Mont.; Park City, Utah; and Jackson Hole, Wyo.

AQUA asked Hayes and two other highly regarded spa installers to share their strategies for ensuring that every installation goes as smoothly as possible — from the pre-install site visit to designing for surroundings and creating hidden equipment access to the finishing touches. Their responses form a mini-manual of sage spa advice and customer service counsel.

The first contact with a potential spa buyer isn't during the site visit; rather, it's the initial phone call, an online inquiry or an in-store conversation. And by that time, most customers already have a vision of how they want their new spa to look and where they want it to be located, and they will happily explain the terrain and particulars of the installation site.

But don't take their word for it, says Juliet Phelps, co-owner of Ajax Pool & Spa in Basalt, Colo. "Go to the house and find out what the delivery will look like. Never trust the customer when he says the intended surface is flat, and the gate to the backyard is big enough."

Mike Krossber, who co-owns Krossber Brothers Pool and Spa in Farmington, N.Y., with his younger sibling, won't even think about selling a spa until he makes a house call first.

"You've got to set the right expectations, even if that customer doesn't buy from you," he says. "At least you're setting him up to have a good experience with another company, because the end goal is for the consumer to believe owning a hot tub is a good thing. It can be a big time sink, but I would rather make time to do that than show up to deliver a tub and have a surprise waiting."

He adds that it's incumbent upon the dealer or builder to explain all of the variables associated with installing a spa. If the foundation isn't quite right, it could void the warranty, for example. Some communities require homeowners to obtain a permit and adhere to local building codes for everything from the vault that will house the spa to railings, decks, lighting and setbacks.

"A lot of my customers haven't had pools or spas in the past, so I try to guide them into making the decision that they want to make, even if they don't yet know they want to make it," Hayes says. "I'll make suggestions that have the spa tie in nicely with the house or the environment. Like, I wouldn't want to make the installation look like a California spa up in the Montana mountains. We try to use the natural resources and colors and themes of whatever environment surrounds the house."

If other contractors or subcontractors are involved in other aspects of a project, it's also helpful to meet with them, Hayes suggests.

"I work with them through the process of what is needed for gas and electric, because that kind of stuff gets missed," he says. "So it's a lot of hand-holding. If they're subcontractors I haven't worked with before, I've basically got to teach them what their scope of work is in regard to the spa."

Krossber likes to meet with landscapers and contractors, too, to make sure that everybody is on the same page when it comes to the spa's location and operational requirements.

"We'll do a couple hundred spas a year, and I think that just about every time, there's something that the consumer didn't think of that would have led to disappointment," Krossber says, emphasizing the importance of not only a minimum of one onsite meeting with the customer but also communication with other professionals on the project.

As an example, he recalls a do-it- yourself buyer who built his own patio for a new spa. Krossber drove an hour to deliver the unit, only to find an uneven patio surface that potentially could cause the spa cabinet or shell to crack within a few years.

"This was a case where the customer did not want to have us make a site visit," Krossber says. "He was very adamant about it. He said he knew right where he wanted the tub. He had a plan, and he was doing everything himself. When I saw the situation with the patio, I basically told him that the right thing to do would be for me to take the spa back to the store and that he should have a company come out and redo the patio. That way, he'd have a long-lasting hot tub on a stable and level surface."

After a tense back-and-forth discussion, the man and his wife finally understood that Krossber was acting with their best interests in mind. "They ended up thanking me and saying this reinforced why they want to do business with us," Krossber says. 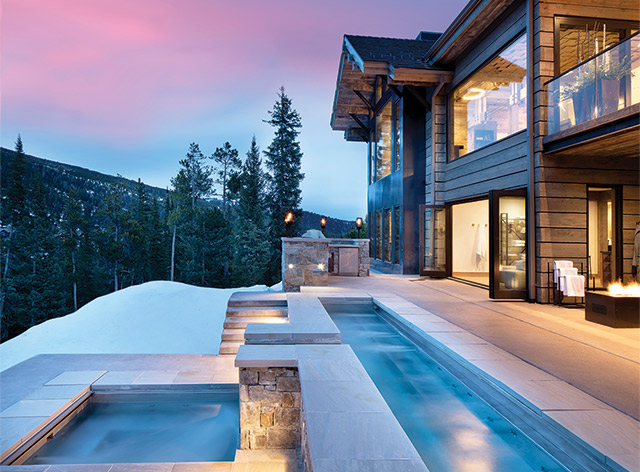 DESIGNING FOR THE SURROUNDINGS

When it comes to locating a spa, Krossber likes to quote Steve Hammock, president of Watkins Manufacturing (one of the brands he sells): "Every extra step you have to take in inclement weather is a reason not to use your spa."

Sticking a spa under a gazebo in the middle of the yard overlooking a lake might look like a brilliant idea on paper, but that location could be 30 yards from the back patio. And in many locales, 30 yards is a long, cold walk in the middle of winter.

On the other hand, when placing a spa close to the home, make sure you leave space for the cover lifter and position it accurately. Otherwise it could block one of the prime views the homeowner envisions.

Some customers might focus more on views than long-term concerns such as privacy and other backyard amenities. That's why Phelps steers them to begin thinking about the future now. That said, she doesn't like to rush a project.

"I'm operating on their timeframe," she says. "But I give them a vision: outdoor kitchen, patio furniture, patio heater, bristlecone pine trees — the ones that don't drop their needles. And I never say 'no' to a fire pit. If you don't plant those ideas, nothing will grow."

Also get to know various trees and plants that are common in your area and consider how their growth, if planted near the spa, will impact future access, views and overall aesthetics. A line of shedding Ponderosa pine trees, unsightly vegetation or intrusive tree roots all can detract from the spa experience.

Krossber has sunk plenty of spas flush into decks or partially inserted them around flower boxes, but he suggests portable spas can boast a more custom look when "sleeved into" retaining walls or decorative rocks. "That way, it almost looks like it's built into the landscape," he says.

The main challenge there is making sure the equipment is fully accessible for servicing — which brings us to... 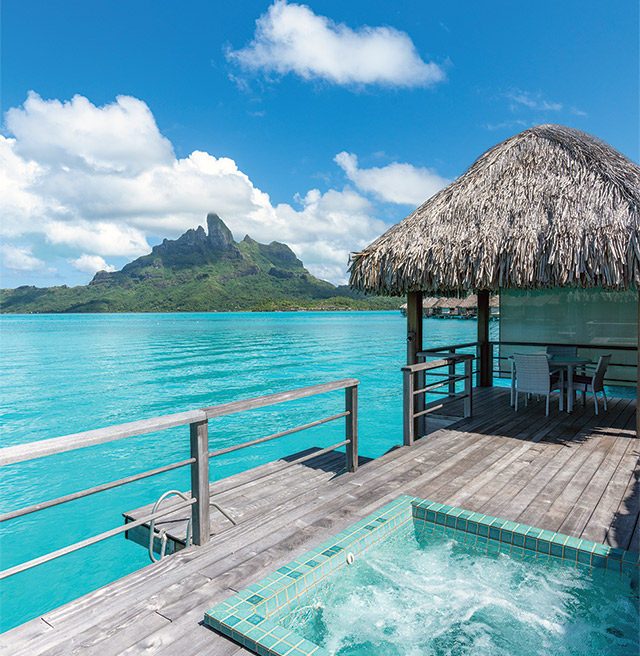 "Consumers forget that these things need to be serviced," Krossber says, adding that they often have "zero understanding" of the electrical requirements of a spa and how those requirements might vary from the property's current capabilities.

Again, this is when communication between the spa installer and the head contractor or landscape architect is vital. "Whoever is working on the project has to take into account that the tub needs to be serviceable. For portable hot tubs, there are all sorts of terms and disclaimers in the product literature — for just about every brand — that dictate the need for them to be accessible with proper ventilation."

"We get fairly creative," Hayes says, explaining that he's not averse to installing equipment in underground vaults dug by his crew. "If we can't do an indoor equipment room for a custom installation, typically we'll have a precast concrete vault built, and we'll bury that equipment room."

An exposed 30-inch hatch door on the ground's surface — often obscured by a planter or shrubbery — will provide access to the equipment, which will be located as deep as 8 feet below ground.

"When we first had a challenge with equipment placement, I made that suggestion, and it worked out really well," Hayes says. "Some environments might have basements. But others have high water tables, so there are no basements, and we can't hide our equipment room in a below- ground space connected to the home. Having that separate waterproof vault achieves what we need it to do."

Just as Phelps likes to extend her relationship with new spa owners by offering them ways to enhance their spa experience over the next several years, Hayes makes weekly service calls available to all new customers for a nominal fee.

"It's an all-inclusive price," he says. "For $50 a week, we're going to show up and top off the chemicals and do whatever else is needed. I don't want my customers getting random bills for different amounts every month, so I streamline the process and just do a fixed rate."

Luxury Mountain's team doesn't always get to know their customers, as some are celebrities and often aren't available. But Hayes strives to build relationships with as many buyers as possible and often wraps up the installation by presenting them with a bottle of wine, plus a package of robes and towels featuring the Luxury Mountain logo on them.

Meanwhile, Krossber Brothers has earned a reputation for completing "wild deliveries," according to the company's co-owner. "I've lowered hot tubs down cliff sides with cable and winch," Krossber says. "I've rented barges and brought them by the lakeside and wheeled them vertically up people's docks. I've craned them over houses. Customers hear through the grapevine that we've done just about anything when it comes to challenging deliveries, so they turn to us."

Even though he has a large staff, Krossber still prefers to be present at deliveries — wherever they may be — even if it's simply to close the loop he started with the initial site visit.

"The day that I don't care about the project is probably the day that I should get out of the business," says Krossber, who claims to have photos of every spa he's delivered over the past 18 years. "This is going to sound incredibly cheesy, but if I can help people complete their vision, that's rewarding for me." 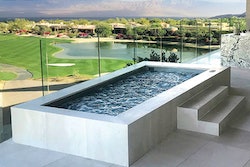 Inside the World of Pre-Fab Custom Hot Tubs 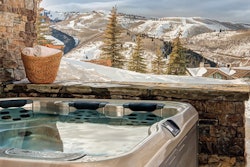 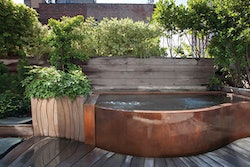 The Wide World of Custom Spas 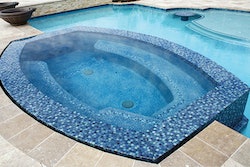