A Sauna Sale, from Start to Steam | AQUA Magazine

Abigail Carpenter
Aug 11, 2022
Christensen Saunas are best described as tiny buildings. This cedar sauna, the company’s most popular model, is complemented with raised flower beds.
All photos by Abigail Carpenter

The state of Minnesota is known for something called “Minnesota Nice,” which means people there are particularly devoted to courtesy, generosity and serving others. And much like its home state, Christensen Saunas (Duluth, Minn.) has built a strong reputation for its Midwest hospitality.

Not only does the company guarantee the sauna’s tried-and-true health benefits, Owner Owen Christensen and his team of seven employees offer an exclusive customer experience, as each sauna is handcrafted and hand-delivered. In fact, Christensen has personally driven as far as 1,200 miles to deliver a sauna — but that’s just part of doing business, he says.

More recently, on a cloudy afternoon, he traveled 300 miles down to Portage, Wis., where my stepdad Ken Griep was eagerly waiting for his own sauna, a purchase he had been contemplating for a number of years but after landing on Christensen Saunas, he decided to bite the bullet. As for myself, I was also outside, camera ready, to witness the handoff — a happy change of pace from the office and a nice opportunity to meet a new industry professional.

Inspired by this personal account, I sat down with Owen to not only walk through the delivery, but about his company history, sauna design and more.

FIRST, A BIT OF HISTORY

Owen started out with a strong interest in small, free-standing buildings, and in the early years, alongside his family and a few employees, he built in the neighborhood of 3,000 storage sheds. Then in 2008, he sold the business to his son-in-law and sought out something new. He tried his hand at deer shacks, lake cabins, and bunkhouses, “but all of this required my kids and me to work out of town, mostly. We lived in tents or motels when we traveled, which got old,” he says.

All the while, he was dabbling in saunas. “I never thought people would want to spend very much on a sauna — maybe twice as much as a shed — but we weren’t building very elaborate saunas, and not very many of them, either.”

Then, Owen found his niche. It seemed the nicer he built his saunas, the more he sold. “We kept adding things we knew would make them better,” he says, “and raised our prices. In 2016, we went all in on saunas and built shops to work in, with built-in compressors, dust control and wall-mounted tools to make the job more precise, more handy.”

Today, Christensen’s saunas have certainly grown in stature and reputation: They are best described as tiny buildings, framed and insulated, offering three main siding options (cedar lap siding, T1-11 textured plywood or hewn half log, with the most popular being cedar; along with custom work to match a buyer’s house), benches and vaulted ceilings. The wooden boards conceal their joints, which gives the siding a wallpaper-like effect.

When my stepdad first fired up his sauna later that same evening, he was antsy to take it for a spin. One of the bigger things on his wishlist was wait time: How long between when he had the urge for a steam to when the sauna was heated and ready to go?

Christensen Saunas relies on its self-made Blueberry Stove for a fast start time, which averages around 20 minutes. The stove has a round firebox made of 1/4-inch thick steel, which expands when heated (it is wood-burning) and shrinks when cool to avoid warping.

“The other benefit of the round firebox is the rock saddles over the hottest part of the stove,” says Owen. “The heat soaks up into them and doesn’t escape outward as much — which reduces heat to the walls.

“A sauna wood stove is based on a large rock mass that will make steam when it’s hot enough. So the way you use these stoves is to get them hot fast, get the rocks hot and then use the water and steam to achieve your sauna.”

He has to often un-educate or re-educate some customers that have used wood heat in the past, “because a wood stove that heats their house is far different. It leans on long-term fires, bigger logs and burns slower.

“That’s not what you want here. You want a short, fast fire. It’s like a race car. I encourage all of my customers to use dry, small wood. Build two fires: one a kindling fire, so when it burns down, about three quarters gone, you can add a lot more wood and not have it go out. Then you choke the air down, and at that point, you’ll already be hot enough for a sauna. You’re just adding wood to keep it going for a couple hours.”

Upon visiting Christensen Saunas, Ken was not met with a showroom, but more of a factory-like setting. “After construction, we bring the saunas out of the shop and have them sitting all over,” says Owen. “And being behind on deliveries, there’s usually seven to 10 saunas sitting out at any one time — which is something I have to cut down on, but it also has its benefits.”

Those visiting the business location (its one and only), have been lucky enough to see most any model sauna they want to view. Or if they call, Owen can let them know when their desired model is in production, so they can come see it in person.

Before scheduling a delivery, Christensen Saunas asks customers for a thorough evaluation of the jobsite, especially when driving long distances. “We expect the customer to judge or measure needed paths and clearances, from roof overhangs to branches to wires. The saunas are delivered by trailer and when loaded, are quite tall (around 12 1/2 feet).”

Oftentimes, there is landscape work that customers want done before their sauna delivery, which is why completed builds can sit for some time. In my stepdad’s case, he settled on two raised flower beds on opposite sides of the sauna, with vegetables and perennial plants, a small detail in comparison to other yards Owen has navigated. “We’ve had one sauna that went across water on a barge, another that had to be lifted over a house with a tall crane, and we recently just received a request from Vancouver Island, British Columbia.”

So far, the deliveries have all been successful — knock on wood. “That is, in part, to our portable, battery-operated jack system that picks the saunas up three feet. You can roll a trailer under the sauna, set it on the trailer and drive to a location,” says Owen. “You then use the jacks to raise the sauna up off the trailer. You pull the trailer forward, and lower the sauna down on the ground. That is the real key to this whole thing."

The sauna has long-established and well-known health benefits. A major study as recent as October 2021 concluded that sauna use mimics physiological and protective responses induced during exercise, reduces morbidity and mortality, and may protect against cardiovascular and neurodegenerative disease. Consumers more than ever have turned to them amid the global pandemic. Even Owen takes advantage of his own product from time to time.

“There’s a lot of contaminants in this world that can get on your skin, and I believe the only way to bathe and get yourself cleaned properly is a sauna,” says Owen. “It’s the only thing that’ll push dirt out of the pores instead of smear it in. I personally use it for sinus trouble. But then you also have those cold and nasty days where it’s just, ‘What else can we do but light the sauna!’ It’s ideal.”

Because of the pandemic’s increased demand, Owen is extremely cautious about over-promising — especially during the winter months in Minnesota — something that all sauna dealers can appreciate. He maintains a heavy schedule, almost three deliveries per week, but is transparent with customers about lead times and delivery costs. “Actually, our lead time isn’t too bad right now,” he says. “A pleasant surprise for most people wanting leisure products.”

When asked what his favorite part about his line of work is, Owen remarked that is the best question we could have asked. “I have a lot of friends in business,” he says. “Some repair transmissions or do body work, some sell insurance or are policemen, firemen, whatever. Almost everybody has some degree of stress. But our customers are so much fun. Once they’ve decided to get a sauna, they’re totally excited; they’re so tickled to get their sauna. They send us letters. It is fantastic. It is.

“Then to top it all off, when we pull out after delivering the sauna and we’re leaving the driveway, we feel so good about what we’ve done that we often step out of the truck and photograph the sauna that we just left. Because it’s in a pretty environment. It’s not sitting in our shop.”

Owen says that in this industry, a photo is really worth a thousand words — and is the best kind of marketing, as most of his customers have found him online. “I do believe pictures are worth everything,” he says. “I know when I do my own search on the internet, I go to images, and I wouldn’t want to buy anything that didn’t hit my eye properly.

“So yes, my profession has benefits far greater than just money. It’s always been the direction that I wanted to go. Even when we were building the storage sheds, we were always proud at the end of the day of what we built. And we get paid for it!” 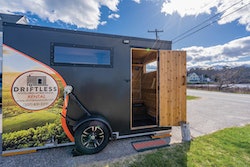 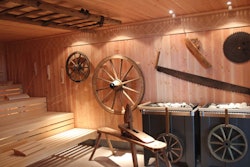 Sauna Through Time at this German Resort 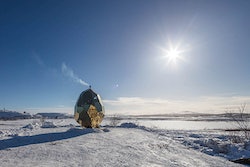 Wild Saunas We Have Known

Remember the Burger King sauna and the floating sauna? Those are just two of the fun, high-concept sauna designs we’ve covered in the past.
September 24, 2019

When Wellness and Entertainment Combine

Aufguss, German for "infusion," is winning converts in European saunas. Will it translate here?
July 3, 2018

Come to Relax, Stay For Your Health

From sleeping better to lowering blood pressure, there are plenty of ways a sauna can improve one's health.
April 12, 2018

The Sauna at the South Pole

Sweating It Out On A Lake

This unique concept in Seattle brings a floating sauna to the lake.
April 5, 2017

Sauna Pants: They're Real, and They're Spectacular

While you may have never heard of them before, sauna pants have been around for decades.
October 11, 2016

This Burger King Has an Unexpected Amenity

A new Burger King in Finland offers a Whopper with a sauna on the side.
July 7, 2016

What's New in the Sauna Market?

Thinking about adding a new sauna to your showroom? Check out our roundup of new and top-selling models.
June 9, 2016
Page 1 of 2
Next Page
Buyer's Guide
Find manufacturers and suppliers in the most extensive searchable database in the industry.
Learn More
Content Library
Dig through our best stories from the magazine, all sorted by category for easy surfing.
Read More