Secrets of a Successful Rock Star

Creating beautiful natural-looking poolscapes using rock, stone and other "nature" elements is not just art, but involves chemistry and engineering as well. If you want to rock your pool world, here are some secrets from Charles Wise, of Wise Pools near Houston, one of the old-timers who has been building award-winning natural design pools for over 40 years, and learned some rocky lessons along the way.

Read on for some useful techniques that can set your pools apart and make them appear more "one with nature" — and keep them from devolving into a polar bear habitat or a mere pile of rocks.

First of all, it is very important to evaluate the house and site and make sure the pool will blend well with the setting. Sometimes a rock waterfall pool can actually clash with the home rather than complement it if not carefully coordinated with its style, colors and scale. Scale is especially important — you don't want a giant waterfall overpowering the site. Sometimes several small "weeping rock" effects can more gracefully integrate with the setting than one large feature. Be sure you can picture people in the scene and not bears at the zoo.

Building a rock-enhanced natural setting pool is much like putting a puzzle together, carefully fitting the rocks using tight, grouted joints. "This is where the eye of the artist comes into the equation," Wise says. "The most natural look will involve not only selecting the correct rock for each puzzle piece, but also selecting the correct face of the rock. The most successful natural looks are achieved by using the rock's exposed surface as it would appear in nature, weathered and full of the character nature gives it, complete with moss and lichens as if the rock is hidden in nature's secret grotto deep in a forest."

Wise tells his men when constructing the rock pool to "lay the rock as if it were naturally found this way instead of piled up like an avalanche." An extra 20 percent of rock or flagstone is recommended to allow for proper piecing of the puzzle together and to get just the right look. Some stone yards will work with a regular customer to allow returns of the excess rocks if they are in good condition, allowing you more flexibility in your material costs.

There are a tremendous variety of stone and rock products available to create natural water features, and your choices will depend on several factors. Aesthetics is of course a major factor, as well as what is readily available in your area. There is a lot of flexibility in achieving the look you want to create for your client.

Consistency is important as you integrate your project with the style of the house, colors and surrounding landscape. You will likely have to work with what is locally available unless your client is willing to absorb the shipping cost for acquiring products from outside your area, which can be considerable.

Limestone rocks are usually widely available for use in Texas and the southwest. Moss rock boulders are effective with darker colorations, and river boulders have a smoother, harder look, with a variegated coloring that is often mixed with other types of rocks for an interesting effect.

The coloration is determined by the mineral makeup of the stone, and this will also be a significant factor in its use for water features because of the way it affects water chemistry. For example, one of the problems with moss rock boulders is high iron content. The iron can erode into the water and cause staining of the plaster. It is especially important when using rock water features in and around pools to use regular sequestering agents and be especially careful to use proper startup chemicals to prevent staining.

Another example of mineral effects is found with use of the pretty cream-colored limestone rocks, which have high calcium content. These rocks can effect pH, alkalinity and hardness of the water and so these water balance factors should be carefully monitored and adjusted constantly in these pools. Also, be very careful with the use of salt systems in rock-feature pools. Some pool builders decline to use them in these pools due to erosion problems from the salt.

According to Wise, it is also important to understand the geological makeup of the rocks you are using. "This was brought home to me early in my career," he says, "when I had a subcontractor doing the rockwork on a very nice waterfall pool. When the owner came home and inspected his waterfall, he called and said he wanted to meet early the next day to discuss it. We walked into the pool together and he took a screwdriver, and dug it into a few of the rocks that looked good on the outside, but crumbled with very little pressure from the screwdriver.

"The owner was a geologist, and explained that the rocks my sub had used were 'early age sedimentary rocks,' and would have dissolved shortly in the waterfall. Needless to say, I had my sub back to replace the bed rocks, and since then I have always checked my materials carefully to make sure they were, indeed, rock hard."

More important considerations in the construction of rock water features include drainage, waterproofing and efflorescence — the leaching of calcium carbonate through the front of the rock face.

"Something we've refined over the years when using rocks where water will be involved is to carefully take into consideration the waterproofing and drainage requirements of the project," Wise says. "These projects can require effective French drains, vapor barriers and using the proper waterproofing products to keep water from either leaking or migrating and leaching calcium carbonate efflorescence on your rock face."

Wise uses several methods of chemical waterproofing on gunite walls to be faced with rock or stone — the proper choice depends upon the specific application. Some products form a rubbery membrane, used in conjunction with a bonding agent. Others are chemical-based, porous sealing agents. "But the real secret to keeping efflorescence from occurring," Wise says, "is to use a chemical waterproofing admixture in the mortar and grout used to set the stone, such as Aquafin."

Many pools with rock water features have a diving rock included as part of the design, and there are special considerations in constructing a diving rock properly. These include the size of the rock and the soil upon which the rock will ultimately rest, and since these things vary so widely there are no hard-and-fast rules. Some diving rock situations may require big footings for the rock to rest upon or even piers to keep a heavy stone or stones in place. Other soil may resemble stable road base, such as heavy iron ore soils, and enable the rock to be perfectly stable sitting on the ground so it can be mortared to the pool beam with the deck poured around it.

Landscaping in and around water features is also a very important part of creating a truly natural look and avoiding the "rock pile" look. It is a good idea to build the waterfall or exterior of a cave with planter pockets for low-maintenance plants, like junipers, for example. These soften the look of the rocks and add to the natural appearance. It is a good idea to spend some time observing as many waterfalls and rock formations in nature as possible to get a sense of how the plants integrate with the rocks. It helps the builder reproduce that look more attractively. It's pretty difficult to improve on God's landscape design, after all.

Far from purely stand-alone features, rock columns make great termination points for other impressive effects such as vanishing edges, stairs and elevation changes, and they lend themselves nicely to fire bowls, spillways and fountain features. For example, exciting Las Vegas-style volcano fire effects are relatively easy and fun to create in waterfalls. To accomplish this, build pockets within the rocks to accommodate custom-made gas jet outlets or purchased burners with automatic ignition for instant fire and water right in your client's backyard.

Lighting is also an important aspect of the design. Recessed lights can be incorporated into a cave ceiling, or perhaps a twinkling sky of lighted stars or color-changing effects. And landscape lighting behind rock beams creates a magical effect around the pool at night.

All options should be presented to owners so they can select from the many upgrades and additions available, but even for owners with a modest budget, pretty little weeping rocks can be used poolside and require only a line diverted off the return. However, be aware it is not a good idea to use return-line water to do too many things, especially if the pool has a spa. Some of these effects cannot run concurrently without a separate pump.

Now is the time to start rocking your world with nature's gifts to create lovely effects within a wide range of budgets and bring a little bit of paradise to even the most urban of your clients' backyards. Rock on! 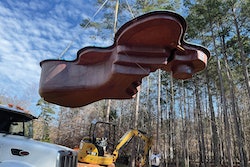 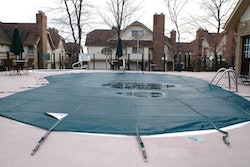 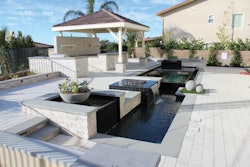 How to keep customers happy and informed through the long build process.
July 14, 2022
Pools

Explore the ingenious applications of landscape and architectural lighting.
July 7, 2022
Page 1 of 224
Next Page
Buyer's Guide
Find manufacturers and suppliers in the most extensive searchable database in the industry.
Learn More
Content Library
Dig through our best stories from the magazine, all sorted by category for easy surfing.
Read More