Much like the coats of paint covering their houses, homeowners want beautiful and durable finishes on their pools, but the staying power of a good pool finish is highly dependent on its environment. Getting 20 to 25 years out of a pool finish requires diligent monitoring of water balance, says Randy Dukes, technical sales representative for Aquavations, South Miami, Fla.

"Cementitious pool finishes are cosmetic coatings applied to the shotcrete shell, the structural part of a swimming pool, and they are generally applied ⅜ to ¾ of an inch thick," says Dukes.

"They are not structural, and they are not waterproofing agents. They are semi-permeable, cosmetic applications. So sound technical practices in water chemistry are absolutely imperative when it comes to maintaining a surface that comes in contact with water 365 days a year. Properly maintained water is the key to the service life of any cementitious finish - that water needs to stay balanced."

While maintaining balanced pool water is not always easy, pool professionals do have an ally to turn to: the Langelier Saturation Index (LSI). This index determines water balance based on readings of pH, total alkalinity, calcium hardness and water temperature. This tool is not new to the industry, but it may be underused.

When dealing with pools with salt chlorine generators, it's critical to use the LSI because it accounts for the difference in total dissolved solids in the water, says Bob Harper, general manager of Pristiva, a salt manufacturer owned by Compass Minerals, Overland Park, Kan.

"Also understand that the higher ionic strength in a salt pool typically means higher calcium carbonate solubility," he says. "The pool's appetite for calcium is actually greater because water will balance itself, taking what it needs if you don't provide it, and you can run into problems like etching of fresh concrete, where it's almost like grooves or pitting in the finish of a pool because the water is taking the calcium out of the finish.

"Another particular problem is called efflorescense. This again has to do with ionic strength and equilibrium, and this is when salt comes in contact with cement surfaces or finishes and typically what happens is the surface is trying to be in equilibrium with the material that's laying on it, so the water will actually draw up calcium salts through the surface itself, which will form deposits. Those deposits typically show a discoloration - it's usually a whitish color. So it'll give a lightening effect to the look of the finish, and this can show up more readily on a pigmented plaster or aggregate finish. The real key to preventing efflorescense is to use a salt with a rapid dissolution rate and then brush the salt vigorously so it doesn't lay in any one particular spot on the surface for any given period of time."

If you do encounter balance issues with salt pools, you're more likely to experience problems like scale and others related to high-pH conditions, because pH tends to rise in salt pools due to the electrolytic process of producing chlorine. For every chlorine molecule produced by the generator, two sodium hydroxide molecules are produced. Chlorine lowers pH and sodium hydroxide raises it, but since twice as much sodium hydroxide is produced, pH goes up.

One way to deal with this slow drift upward in pH is to install an acid feeder, says Dukes. "These feed trace amounts of diluted acid to the pool during the operation of the equipment and the cell and help maintain the pH, so that the pool service guy doesn't have to be there two or three times a week or the homeowner doesn't have to go out and add a cup of acid every other day.

"Putting acid in the pool will drive the alkalinity down, so every couple of weeks, you need to add sodium bicarbonate to get the alkalinity back because low alkalinity will make the water corrosive."

At Start-Up And Beyond

Starting up a pool with a salt chlorine generator can present special challenges. The salt, of course, cannot be added until after the initial finish curing period of 28 days. Dukes recommends using dichlor to chlorinate during that time because it's a fairly pH-neutral product, and it's 57 percent cyanuric acid by weight. Then, when it comes time to add the salt, check to be sure there's a free chlorine level of 1.5 to 3 ppm in the water, says Dukes. If your reading is below this, the salt chlorine generator will work much better if you shock the pool to remove the combined chlorine.

"A lot of municipalities are on chloramines, which is ammonia and chlorine, and the salt generators are not capable of overcoming this combined chlorine," says Dukes. "So they need to develop some free chlorine rather than expecting the chlorine unit to overcome that combined or total chlorine. I think this really fools people. They get the pool up and running, they get the salt chlorine generator out there, they turn it on, they've got combined chlorine and they can't get any free chlorine out of the salt generator."

Another recommendation is to use sequestering agents at start-up and then regularly afterward. "Sequestering agents are absolutely wonderful, and if they're used properly, they're non- aggressive and they help remove the metallic alloy from solution and capture it in the filter to help remove and prevent staining," says Dukes. "But with that said, you know what you have to do in your shower and your kitchen sink? When it gets moisture on it, it tends to scale or sometimes stain a little bit, and you have to scrub it, usually with a chemical. So using a good sequestering agent in conjunction with a brush, you can usually rectify a lot of the discolorations that happen to swimming pool finishes."

In salt pools, Harper recommends using a non-phosphorous-based sequestering agent. "Traditional pool chemicals tend to break down in the harsh conditions inside the salt chlorine generator cell. The most commonly used chemistries for sequestering agents are phosphorous-based, and while these have been used for decades in the pool industy, they have just proved to be ineffective in salt water pools because not only do they break down so they're rendered ineffective, but the byproducts of many these are orthophosphates, which can create a lot of problems in a salt water pool."

To avoid the potential pitfalls of the high TDS levels in salt pools, Jon Temple, a veteran pool plasterer and owner of Tempool, in Jacksonville, Fla., likes to use ozone as the primary means of sanitization and a salt chlorine generator as secondary means. "This way we're able to put less salt in the pool, and turn the machine down lower to back up the ozone, so we're creating fewer total dissolved solids," says Temple. "I really got into that when I worked over in the Middle East because there's no chlorine there, so they really use a lot of ozone."

Because an ounce of prevention is worth probably much more than a pound of cure, it's really ideal to keep the water balanced in the first place. To do that in a salt pool, Temple says it's important to regularly clean and recalibrate the salt chlorine generator cells. "Salt chlorine generators cost around $1,500, and the cell in them tests the water to see how much new chlorine needs to be made. Well, I have an electronic tester that cost me around $2,200, and after every three times of checking water, I have to recalibrate it so I get an accurate reading. If the machine that's in the pool on the salt cell only cost a couple hundred bucks, I'm sure it's not getting accurate readings after a while. It needs to be recalibrated. The indusry has to show maintenance people and homeowners how to clean the cell and to make sure it's actually functioning properly. The water also needs to be tested regularly with a test kit. Salt cells are not maintenance free. They still require somebody to get out there and test the pool and maintain it."

Because Jon Temple is always looking for ways to give his Tempool clients a superior finish, he runs various experiments at a couple of test pools he has set up at his facility. Recently, in the process of running some tests, he stumbled upon a new technique for acid washing finishes. "We're putting a patent on it right now," he says. "There are some new steps we're taking in acid washing swimming pools, and this is the biggest thing I've ever seen in the industry."

Temple naturally did not want to go into the finer details of this new technique, but said it's all about helping the curing process so that you don't get so many total dissolved solids during the first month of start-up. "What we're wanting to do is keep the calcium levels down as low as we can so when salt is added, it doesn't create such a problem." Temple will host classes in Jacksonville, Fla., in January of 2011, sharing the details of this new technique. 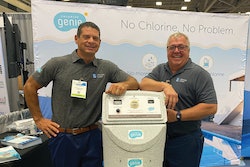 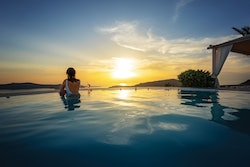