“Dan did a great job getting it to a certain point, and it was time to take things to the next level,” says Gabe Giordano, president at Ultimate Water. “We’ve revamped, upgraded, and moved manufacturing, and really just brought things up to standard. Even though the product has been out there for a while, we’re just now launching, because it’s new in so many ways.”

So — what differentiates the Chlorine Genie from other salt chlorination systems? “We’re the only system that uses salt but doesn’t put it directly in the pool,” explains Giordano. “Instead, we are creating chlorine within our unit at the equipment pad, and then delivering it directly to the pool.”

A typical salt chlorine generator system uses hundreds of pounds of salt poured directly into the pool and circulated through a cell to produce chlorine. The Chlorine Genie effectively downsizes this extra-large operation into a small but powerful box.

At its core, the Chlorine Genie breaks down salt with electrolysis, the same chemical reaction used in conventional salt chlorine generators. In the case of the Chlorine Genie, however, the process begins when a relatively small amount of tap water enters the unit and is immediately softened by reverse osmosis and water descaling. Cleaning the water before it enters the chlorine generation tank helps eliminate some of the usual salt water pool headaches.

“In certain climates, TDS just keeps rising and rising by itself, because you’re evaporating about 2 or 3 inches a week in the summer. But the salt in the water stays there,” says Ultimate Water’s Patrick Lajoie, director of business development. “That increase in TDS throws off your water balance, and then you’re going to get staining or residue.”

Next, inside the brine tank, an electrolytic cell breaks salt down into chlorine and hydrogen gases. The chlorine gas is absorbed in a mixing chamber to produce the chlorinated water that enters the pool.

A special discharge valve puts the leftover hydrogen to good use: Opening the valve vents the gas to waste, lowering pH, while closing it sends the gas back into the pool, raising pH.

“We have that option to physically adjust pH without adding other chemicals, just by using the existing system,” says Lajoie. “With a traditional salt system, you’d have to resort to muriatic acid or soda ash.”

When running at an optimal 15 amps, the Chlorine Genie is capable of producing 5 to 6 gallons of chlorinated water per hour. It can produce sufficient chlorine for an average pool in a daily, single, 4 to 6 hour run cycle.

From a labor perspective, the Chlorine Genie can eliminate a lot of hassle. For one thing, users no longer have to haul huge amounts of salt into the backyard on a regular basis.

“This system takes two to six bags a year to maintain, versus the 10 to 12 it would otherwise take to start up a pool and probably repeat once a quarter,” says Giordano.

And the salt addition process itself offers flexibility, explains Lajoie. “The dealer, installer or service company can do it the way they prefer. Either they can come in on a weekly basis and add a little bit of salt as they go along, so it’s always perfect, or they can just wait until it goes down, and add salt when it’s needed.”

The Chlorine Genie’s steady chlorine production can also manage chemistry fluctuations that accompany heavy bather loads and once-a-week chemical service. “With our system, you’re not having to shock the pool causing chemical levels to spike up and down,” says Giordano. “You’re going to have stable water, ultimate water, because the pool is getting the same chlorine dose every day, instead of once a week.”

“It can be a hassle to clean most traditional cells,” adds Lajoie. “You have to take it off, unscrew it, put it into a bucket of acid, get your goggles on, scrub off the scaling and put it back together...but you never have to take out our cell. It has its own acid reservoir and an air pump, and you merely pump the acid into the cell, and it self-cleans automatically.”

The Chlorine Genie’s approach to chlorine generation has garnered welcome attention for Ultimate Water in its first foray in the national spotlight. Chlorine Genie was showcased in the Products Pavilion at the Pool | Spa | Patio Expo in Dallas, where it scored Best in Show. 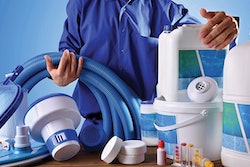 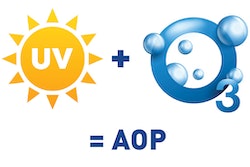 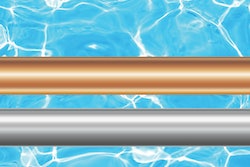 Examine Advanced Oxidation Process (AOP) systems and their use in modern pool maintenance.
May 26, 2022

Examine the properties of passive mineral ionizers, referred to as "mineral sanitizers," for use in swimming pool and spa sanitation.
November 18, 2021

Note From Texas: Don't Forget to Winterize Those Filters, Heaters, Pumps and Pipes

The greatest pool winterizing debacle in history teaches us the importance of prepping the pool for the off-season.
November 4, 2021

What's new in pool equipment? Browse this selection of new products, which showcases the best in the category.
October 21, 2021

Are AOP & Salt the Perfect Match for Crystal Clear Pools?

Learn about the combined benefits of advanced oxidation and salt-water chlorination.
October 12, 2021

Strategies for the Chlorine Shortage

Chlorine reduction equipment such can not only help solve this summer's problem, but the long-term wishes of most pool owners.
July 1, 2021

AOP + Pools: For Some, the Perfect Match

Eco-friendly approaches to pleasant pool water
September 18, 2010
Page 1 of 1
Buyer's Guide
Find manufacturers and suppliers in the most extensive searchable database in the industry.
Learn More
Content Library
Dig through our best stories from the magazine, all sorted by category for easy surfing.
Read More