A Transformation in Tile | AQUA Magazine

A Transformation in Tile

Steve Lambert was the right guy in the right place at the right time.

Back in 2008, the longtime landscape architect and pool builder, who owns Garden Lights Landscape & Pool Development in Orinda, Calif., was called to testify as an expert witness in a homeowner’s lawsuit. According to the homeowner’s complaint, the Italian glass tile the original pool builder installed throughout the interior and exterior of a long and narrow hillside pool kept popping off, even though the pool was less than two years old.

Lambert spent a lot of time conducting investigative work at the pool, which is nestled in the hills of the posh Berkeley Hills neighborhood of Berkeley, Calif. As things turned out, the tile — riddled with impurities — was not made for a water environment, which is why tile delamination quickly set in. Lambert discovered other design flaws, too. They included a vanishing-edge basin that was so deep that a net was installed to catch anybody who fell out of the pool, and a vanishingedge clad in slate so thick it was too heavy to adhere to the concrete wall (see image).

With this level of malpractice, the plaintiff’s case was straightforward enough, but it had an interesting twist at the end. After seeing Lambert’s testimony, the homeowner asked him to take on the renovation and make the project right. After the disagreeable experience of watching the original installation crumble into dust, Lambert says, “the homeowner came up and told me, ‘You’re the only one I trust to do this job.’

That project marked the first time Lambert used Lightstreams Glass Tile, a relatively new product at the time. Lambert connected with Lightstreams Inventor David Knox and collaborated on a comprehensive glass tile solution: They decided to wrap the entire pool and built-in spa in Lightstreams tile, replacing the original crumbling tile and slate with handcrafted glass tiles specially made for underwater use.

“I’d seen pictures of the tiles but hadn’t actually used them yet,” Lambert recalls. “But since then, we’ve probably used them on 35 or 40 pools.”

While most of the project is clad in the solid and saturated side of Lightstreams’ Renaissance Royal Blue glass tiles (with the corner steps in Aegean Sea Jewel glass accents), a highlight of the pool is the subtle river mosaic on the vanishing-edge wall using the iridescent side of the Renaissance Royal Blue tiles and the iridescent side of Intense Blue tiles. The shimmering “river” flows over the wet wall, onto the floor of the catch basin and reappears on the outer wall to create a compelling design feature both up close and from a distance — as well as from the pool itself looking over the edge and down the wet wall.

“I was on the site and doing my sketches for the mosaic, and Steve did the engineering,” says Knox, who worked closely with Lambert and tape mounted each tile. His pencil drawings assisted the homeowner in better understanding the concept the pair wanted to execute. “But it wasn’t just the tile that was the problem on this project.”

When the homeowner gave Lambert the go-ahead to make things right, after all the homeowner had been through, Lambert knew he had to deliver — which is one reason why he opted to have Knox onsite to help oversee the process.

“I was determined to not have any problems with this pool,” Lambert says, adding that in addition to chipping out all the old tile (that hadn’t already fallen off) and replacing it with new, he also needed to ensure the rest of the pool met a higher standard of design as well. “My solution for the basin being so far down was to raise the basin wall and make the client feel much more comfortable in case anybody happened to fall off the edge. The main reason was safety.”

Additionally, Lambert and his crews needed to strip out the pool’s original waterproofing which was not effective, and apply a Laticrete product instead.

“The original pool builder wouldn’t tell us what waterproofing material he used. Whatever he used for waterproofing — and it might have been an okay product that just was installed wrong — it wasn’t making a good connection to the gunite, and big patches of tile would have continued to fall off,” Lambert says. “One of the reasons the client sued the builder was because the builder said, ‘Well, we’ll just continue to repair the tile forever.’ That’s not the answer.”

But effective waterproofing was the answer, and now Lambert won’t do an all-tile project without taking that extra step.

“I don’t do a whole lot of them, but whenever I do, we waterproof the whole thing, because there’s a lot of surface that’s depending on the tile to be the waterproofing unit,” he says. “A double layer of waterproofing is definitely the way to go.”

All told, renovating the pool took about three months, according to Lambert. But because the deck and outdoor doubleantique Jerusalem limestone also needed extensive work, the entire project took about six months to complete. What’s more, the steep hillside location required that all materials be brought in by hand and limited the number of crew workers that could be onsite at any given time.

'TAKE YOUR BREATH AWAY'

For Lambert, this was a high-end project — the tile renovation work alone cost about $100,000 — but he says even a small amount of tile can dress up a pool.

Knox agrees, “We’ve got projects on our website that are straight water lines with $2,000 or $4,000 worth of tile. Even if you just use a little bit, you can create a work of art, and a lot of our clients realize that,” adding that many orders are for 100 or 150 sq. ft. of tile to give the pool added elegance.

“It’s like having a gorgeous necklace with a black dress,” he says. “You don’t need a whole lot of it, and that’s what I tell customers. In fact, having too much of it can make things look clumsy.”

Homeowners are willing to pay for quality and uniqueness, Lambert adds, and tile art on a pool provides it. That certainly was the case with the Berkeley Hills renovation project, which all these years later remains one of the most challenging in Lambert’s portfolio — and among his favorites. Not only was he able to right the project’s original wrongs, but he also began using a product that, over the years, had helped take many of his projects to another level.

“It just adds magic to the pool,” Lambert says. “I’ve got some pools that the tile line alone will take your breath away when you look at it for the first time.” 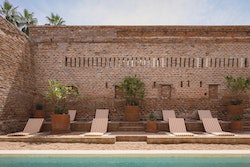 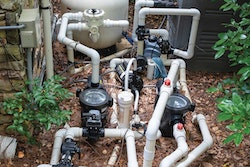 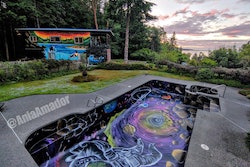 A Transformation in Tile

A tale of redemption for a badly delaminated tile pool.
March 24, 2022

What once was a public swimming pool has become a chic place to ride out the daily grind.
October 12, 2021

To Splash With Flying Colors

A Guide to Painting Pools and Decks

Painting is a simple and cost-effective way for customers to renovate their pool and deck.
January 7, 2021

Pipe repair without removing the pipes? This California hotel did it in just four days.
June 28, 2018

How (and Why) to Use Brick Paving in Your Landscape

Brick is trending in backyard designs — take a look at just a few ways you can incorporate it into your next design.
November 14, 2017

Sponsored Video: How to Paint a Pool

Need to revitalize a pool? A fresh coat of paint is a cost-efficient way to protect and beautify most any aquatic structure. Here, the pros at RAMUC explain the process.
April 11, 2017
Page 1 of 1
Content Library
Dig through our best stories from the magazine, all sorted by category for easy surfing.
Read More
Buyer's Guide
Find manufacturers and suppliers in the most extensive searchable database in the industry.
Learn More