Near the end of 2011, acrylic spa giant Watkins Manufacturing announced that it had acquired the assets of American Hydrotherapy Systems (AHS), makers of the FreeFlow brand of rotationally molded portable spas. The move signaled a shift in philosophy, as Watkins began to focus on a part of the market President Steve Hammock admitted the company had previously given little attention.

"One of the market segments where we've never really done a lot of activity is in that opening-price-point area," Hammock told AQUA in January. "So the roto-mold sort of came along with our view of consumers and how we could best satisfy those folks and expand our reach."

Meanwhile, about an hour and a half down the 15 from Watkins' Vista, Calif., headquarters, Cal Spas was busy rolling out its own line of rotationally molded hot tubs, which it introduced to the market at the International Pool | Spa | Patio Expo in Las Vegas last November after about two years in development.

"This just enhances our product offering. Now dealers don't have to sell against it or try to get a consumer to change his mind if he came in thinking he wanted a rotational spa," she says. "They don't have to upsell them or talk negative about it. Now they can say, 'You know what? Here are the benefits of a rotationally molded spa, and here are the benefits of an acrylic spa.' Then they can leave the choice to the consumer."

Chief among these benefits are lower price and higher portability, two things Noble says a new brand of consumer is finding increasingly attractive.

Cal Spas had an inkling that lower-priced units would sell in today's economic climate, and had been hearing from its own dealers that many consumers wanted something less expensive. But before making the move, the company did some research into who was looking to buy hot tubs and what, exactly, they were looking for.

What it found runs counter to the long-held view that aging baby boomers, in need of hydrotherapy and flush with cash, represented the industry's best bet as it searched for more consumers.

"There's been a shift," Noble explains. "The consumers are getting younger for this product category, and they're mostly first-time buyers, according to our studies. They don't look for all kinds of options and features. They just want a hot tub at a price they can afford. The add-ons like waterfalls, LED lights, stereos and TV that are offered on acrylic spas these days take the price point totally out of their range.

"We thought about it and realized that, like in any business, if you don't change you become obsolete. So we said, 'We need to introduce a product line that captures that new generation of buyers.'"

"The dealers love it," Noble says. "It's a niche we were missing in the market. The dealers are telling us they'll be able to do a lot with it, so we're expecting great results."

While Cal Spas and Watkins will be offering rotationally molded hot tubs, they are going about it differently.

Watkins is betting that the company is better off buying an existing brand, which was already in production and has some currency with dealers and consumers. To take advantage of that brand recognition, Watkins will keep the FreeFlow name.

"We bought the business as is," Hammock said. "That's why you buy a business rather than starting a business on your own. They've done a good job of protecting their brands and establishing a name within the trade. So that was part of what we acquired, and we're going to continue with that."

Cal Spas, on the other hand, decided to build a brand from scratch. Dubbed Genesis, the new line of spas includes four unique molds, each with two jetting options, making a total of eight different models.

"It was a basic molding and tooling process, and we've been working on it for a couple of years," Noble says. "You don't just make a mold overnight; it takes a while."

Part of the process involved getting input from a diverse group of employees Cal Spas called the Delphi Panel. It's made up of people from different departments and different backgrounds that meet to consider changes.

"That's where we first heard that dealers were asking for a low-price-point product," Noble says.

The group felt comfortable that the new line wouldn't detract from Cal Spa's carefully crafted image as a high-end supplier of not only spas, but everything that can go with them — barbecue islands, gazebos, surrounds, firepits, bars.

"I don't think this will change our image at all," Noble explains. "We consider ourselves a complete manufacturer for any budget, and for any consumer wish list."

In fact, the company will offer a limited selection of surrounds for the roto-molds, and customers will have the option to upgrade cabinet panels to more closely match the look of acrylic spas.

"We knew our customers would be asking for extra accessories," she says.

As Watkins and Cal Spas enter the roto-mold business and apply their marketing muscle to the category, executives at Dream Maker Spas, in Lake Mary, Fla., can only smile. "What they're saying is what we've been saying for the last dozen years to dealers across the country," says Gibb Teel, Dream Maker's national sales manager. "We've been going to different markets and selling dealers on the idea that you've really got to hit every price point, all the way from $2,000 to $20,000, or you're cutting yourself off from a big segment of the market."

This pitch has served Dream Maker and other roto-mold companies well for years, but there's been a percentage of dealers who just weren't buying. Now, though, with two industry leading acrylic manufacturers hopping on board, Teel thinks the message will finally convert the holdouts.

"Now, when you have Cal Spas and Watkins getting involved, it really does legitimize the fact that every single dealer in the country needs a roto-molded spa to fill that niche."

Like Noble, Teel acknowledges that today's younger hot tub buyers have gravitated toward lower-priced products, but points out that the economy has been just as big a factor in his product's popularity.

"It's a fact that with the economy, even though the hot tub business has taken it on the chin and sales have gone down, people still want to relax in hot, therapeutic water," he explains. "But that person might not want to spend six to $8,000 to do that these days.

"In addition, the roto-molded spa offers the consumer the ability to move it if they're in a condo, to drag it to the other side of a deck if they're redecorating, or to put it in the garage over the winter. You can even take it to a tailgate party."

Of course, the category's growth is something of a double-edged sword for existing roto-mold makers now that there's new competition with strong ties to retailers in many markets. Teel freely acknowledges the added pressure, but says he views the situation as more of an opportunity for Dream Maker.

"It opens up every single market to us; every single dealer," he says. "If dealers don't already understand that they need roto-molded spas to compete with other dealers in their market, they soon will.

"There are enough dealers and just the right amount of manufacturers to make this a great thing."

In fact, not only is Dream Maker refusing to shrink away in the changing marketplace, it has decided to meet the challenge head-on by introducing it's own line of acrylic hot tubs.

Says Teel: "We want to be a one-stop shop for a dealer, as well, where they can put out a number of rotationally molded spas and a number of our acrylic spas all on one truck and save on freight, and save on headaches and logistical concerns.

"They can literally supply their entire showroom floor from one manufacturer."

What Is Rotational Molding?

Rotational molding, also known as roto-molding, roto-casting or spin casting, is a molding process for creating many kinds of mostly hollow items, typically of plastic.

As the plastic resin heats up, the mold is slowly rotated on horizontal and vertical axes, which causes the melted material to flow and stick to the walls of the heated mold. The spinning continues during the cooling phase of the process to ensure uniform thickness.

One of the advantages roto-molding has over injection molding is that the pieces are formed with heat and rotation, and therefore the molds are not subject to the high pressure that comes with injection molding. In addition, the material is lighter and less expensive, and minor changes can be made to molds more easily than with either blow or injection molding. 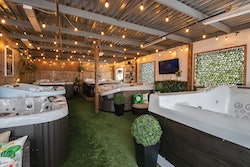 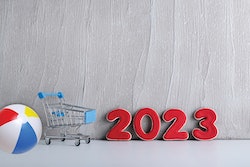 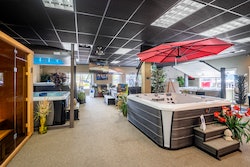