What began in 2004 as a request for a custom slide evolved into not one but two major backyard renovations. In an era of infrequent new pool sales, when many pool builders have come to rely on upgrades and remodels to make ends meet, Dan Lenz, vice president of All Seasons Pools and Spas in Orland Park, Ill., is beyond pleased to have a repeat customer.

The first renovation, completed in 2005, came about because the homeowner did not want to see or hear his equipment anymore, and he liked the idea of hiding it behind a slide. He had seen a slide with artificial rock in a magazine and thought something along those lines would suit his family well, Lenz recalls. They went from that initial concept to a gunite cave and waterfall area reminiscent of theme parks.

“While we were designing the rock formation for the slide, [the owner] said, ‘I want a waterfall, too,’” Lenz recalls. That was just the beginning.

The existing package pool already had a love seat, and it made some sense to design the cave and waterfall around it. But that meant the equipment would not be hidden by the slide structure after all, so Lenz proposed building a wall in the same style as the waterfall/cave structure. The wall would effectively hide the equipment pad, which grew to include an additional pump for the new fog system and a booster pump for the new automatic pool cleaner.

In the end, the 2005 project also included a shallow splash pool between the existing pool and the new wall as well as fiber-optic lighting both in the new arcing laminars and in place of the conventional single white light in the deep end. Oh, the pool also got a new liner.

Five years later, in part because All Seasons proved how well it could work in the tight spaces found on this cul-de-sac lot, Lenz received a call from this now-familiar client. His family was near completion of a significant addition to their home that had torn up much of the property around the pool. While the yard was a construction zone anyway, they called upon All Seasons to upgrade the deck and add stone coping. By summer 2010, All Seasons had designed and built a splash pad, an outdoor kitchen, and a sand box with an adjacent arbor that doubles as shower for rinsing off sand.

Back in 2005, the variable-speed pump technology now considered state-of-the art was still largely unknown and untested in the pool industry, Lenz recalls. Further, he says that if he were doing the same renovation today (adding the waterfall, fog system, new pool cleaner, etc.), he would have recommended variable-speed for sure, instead of the two additional pumps he did end up installing.

For better or worse, the almost-six-year-old liner will have to be replaced at some point. When that time comes, Lenz anticipates upgrading to variable-speed, which will go a long way toward satisfying the original desire for quieter equipment.

Lenz also plans to propose an upgrade to LED lighting, which he anticipates being a straightforward job because the brick pavers currently in place will allow his crews to lift only what is necessary to access existing niches and wiring for replacement purposes.

Lenz further anticipates an automation upgrade in the near future. “We put in digital controls that were state-of-the-art last year, but they now seem outdated because he can’t control them with his iPhone,” Lenz says.

The ongoing evolution of this pool just goes to show how important it is to think outside the box, especially when dealing with vinyl-liner pools. “The more you can do to show people how unique a vinyl pool can be, the better,” says Lenz, who now routinely visits job sites with his iPad so he can show clients and prospects what their pool might look like if, for example, he were break up the deck with some planters, add stone coping, or inject a little whimsy with a fog system and faux dinosaur bones.

“A planter and a few laminars won’t add much to the cost, but those kinds of things take a standard pool and turn it into something unique,” he concludes. 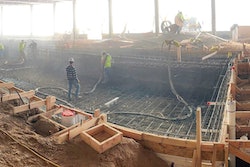 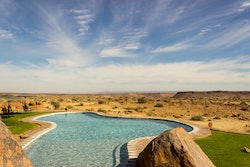