The Birth of the Automatic Pool Cleaner

Automatic pool cleaners come in a fascinating array of designs.Yet, they all share the common goals of increased convenience, clean water and ultimately improved consumer experience.

In 1957, Andrew L. Pansini made a curious observation. While cleaning his pool in Greenbrae, Calif., he noticed a garden hose that had fallen into the pool was moving back and forth, lifting the dirt on the floor of the pool up into suspension, which would then settle down closer to the main drain at the deep end of the pool.

That's when it struck him: He had discovered what would become the basic concept for the automatic pool cleaner (APC). A year later, Pansini founded Jandy Products and began developing and selling the world's first APC.

Pansini's ensuing rise to fame and fortune was documented last summer by his son and former Jandy CEO, Andrew A. Pansini, in his book "Fathers of Invention." In describing his father's revelation, Pansini writes: "That's when he had his own life-altering vision. If he could design a device that could control the movement of the garden hose, it would be able to move the dirt to the main drain and out through the swimming pool filtration system."

Bringing that idea to fruition would prove to be a long road, Pansini recalls, "but that was essentially when my dad invented the world's first automatic pool cleaner, a product that would change an entire industry."

The first machine was more of a jerry-rig than an APC as we think of it today. It involved a water supply pipe that extended about 8 feet into the pool affixed to a garden hose at one end that was placed on the pool deck. On the other end of the pipe was attached another hose pointed downward to the floor of the pool.

Pansini needed something to support the pipe so it would not sink to the bottom. So he welded two funnels together, making a floating device, and then placed the pipe and float in the center of the shallow end. He would then move the pipe to the deep end and eventually the dirt would be pushed out the main drain.

The inventor of the automatic pool cleaner, Andrew L. Pansini, at his pool Greenbrae, Calif., where he first developed the idea.

It was far from a viable product design, but his basic concept worked. The makeshift float with a hose connected to it was the basic design of his original 17-year patent. Pansini's invention was the first "automatic" pool cleaner and would become the driving concept behind the iconic Arneson Pool Sweep and Jandy Porpoise APCs.

In developing his concept, Pansini would bring other now-famous innovators into his fold, including Howard Arneson and the Jacuzzi brothers.

"He called around to see if he could find a pump that could be used to boost the filter pump pressure," Pansini recalls. "That's when he met the Jacuzzi brothers who owned Berkeley Pump over in the East Bay. The Jacuzzis were making water pumps long before they famously invented the Jacuzzi Tub. I remember Rudy Jacuzzi came by to visit my dad on many occasions to discuss the booster pump and business ideas. They were kindred spirits in their thirst for innovation."

As Pansini vividly recalls, "While developing the pool cleaner, Dad would always come up with new ideas, many of which would set the foundation for future cleaner technology. For example, the new cleaner was removing the dirt from the pool, but not the leaves, so he developed a product called the Leaf Master, which attached to the pool pole and to the garden hose. It was a quick and easy way to remove leaves from the pool.

"The Leaf Master that he designed in the 1960s is still being sold worldwide today. With hard work and dedication the product, now called the Pool Sweep, took off. It did not look much like the original pool cleaner, but it still worked on the principle of a floating device with hoses attached to it, the basic principle of the 044 patent."

RIGHT FOR THE TIME

It's hard to overstate the importance of the APC in the development of the pool industry. In the '50s and '60s, the post-WWII generation was giving birth to the Baby Boomers and spreading out from major urban centers to create the modern suburbs, where most of the U.S. middle class lives to this day.

Mid-century consumers were all about convenience. It was the era of the dishwasher, hair dryer, power mower and transistor radio. It was a time when futuristic vision of space travel and modernity on earth dominated the popular imagination. Disneyland debuted Tomorrowland and television featured hit sci-fi shows like "Lost In Space" and "Voyage to the Bottom of the Sea."
It was also the time of great expansion for swimming pools. Once strictly a luxury item for the wealthy, a generation of enterprising builders began building pools for the middle class, essentially creating the modern pool industry. At the time, the primary objection to pool ownership was the effort and expense of upkeep.

The APC mitigated that problem and did so with an intriguing robotic device that fit perfectly with the consuming public's taste for jazzy technical innovation. APCs had personality as they moved around the pool seemingly of their own volition and they dramatically reduced the need for manual sweeping and vacuuming.

Pansini and Arneson's cleaners, particularly the Pool Sweep, rode the wave of modernity and dominated the market throughout the 1960s, but stiff competition was on the way.

At 1973's National Swimming Pool Convention in Anaheim, Calif., a local company called Swimrite introduced a new APC called the Polaris. Invented by Dr. Mel Henken of Texas, the Polaris was the first competitive APC that was not based on Pansini's original patent.

"It was like a little tractor running around the floor of the pool and it used a Venturi jet to suck up leaves into a bag that was attached," Pansini recalls.

The Polaris would become the world's leading APC. 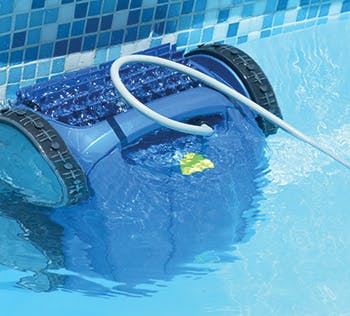 The APC arguably helped pave the way for the development of the modern pool industry.

APC's that operated on suction lines, instead of the pressure side, were also coming on the scene. In 1974 South African hydraulics engineer and inventor Ferdinand Chauvier invented the first version of the now iconic Kreepy Krauly, which was introduced in the U.S. in 1978. Although the original versions were slow to catch on, continued improvements led to the Kreepy Krauly becoming one of the most successful and enduring brands of APCs.

The rise of microchip technology would soon find its way to the pool and spa industry with the advent of "robotic" pool cleaners. The first patent for a robotic pool cleaner was issued to Robert R. Myers in 1967, but the first available model didn't appear until 1974. Since then, numerous patents have been issued for "RBCs," with scores of models now available.

RBCs are equipped with microprocessors and software that controls the unit's on/off functions, direction and change of direction. RBCs claim a number of benefits above and beyond the conveniences of traditional APCs and have become popular in large commercial pools.

Proponents of RBCs firmly believe the technology represents the future of pool cleaning.

Still, the affordability, convenience and serviceability of traditional cleaner have continued to bolster their popularity. There are now a staggering number of cleaners in all categories, suction, pressure and robotic, available worldwide.

Andrew L. Pansini passed away on Nov. 4, 2011, at age 93. Having lived to see his simple observation grow into an international industry, he remained creative to the end. His final patent was issued in 2010 and at the time of his passing, he was working on a new type of automatic pool cleaner known as The Retriever.

RELATED: The First US Patent For A Pool Cleaner 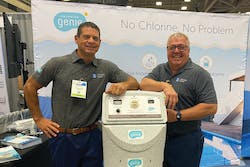 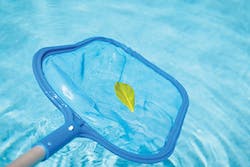 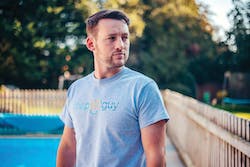