Once considered the perfect solution to pool and spa sanitizing challenges, saltwater chlorination systems have come under fire from some who express concerns about corrosion of metal components and damage to deck materials due to splash out. In this special feature, Senior Editor Eric Herman takes a look at the technology with an eye toward overcoming some of those problems while maximizing the benefits, and the trends that might impact the future of the "saltwater pool."

Electrolytic saltwater chlorination of swimming pools came on the scene in the U.S. as a "mainstream" alternative to traditional chlorination methods in the late 1970s. The technology had been in use for several years in Australia where it met with tremendous market success — estimates range from 70 to 90 percent of pools in the Land Down Under are sanitized using some form of saltwater chlorination.

Proliferation of the technology in the U.S. has come more slowly, but by the mid-1990s it was clear that saltwater chlorine generators were gaining greater and greater acceptance. Growing numbers of builders turned to electrolytic chlorine generators (ECGs) as their preferred method of chlorination due to an extremely compelling list of benefits, and soon consumers began boasting about their "saltwater pools."

The concept is simple: Salt is added to water to reach concentrations typically ranging from 2,800 to 3,500 ppm (that equates to about 50 pounds of salt per 2,000 gallons of water), a concentration that is roughly 7 to 15 percent that of seawater and only slightly noticeable to most swimmers. Filtered water passes through an electrolytic chamber where DC current is applied producing hypochlorous acid along with hydrochloric acid, sodium hydroxide, and hydrogen gas. Water passing through the cell reaches "breakpoint" chlorination, which destroys a number of compounds, including inorganic chloramines, the chemical species most commonly associated with chlorine-related problems including eye irritation, chlorine odor and foul taste.

Water's conductivity is increased by the dissolved salt — sodium chloride (NaCl) — that in effect supports the electrolytic reaction that takes place in ECG unit, where the sodium is split from the chloride through the process of electrolysis. Essentially, the technology uses the chlorine in salt to generate free available chlorine residuals needed to sanitize the pool. The sodium recombines with the chlorine and repeats the process, meaning the only salt you need to add is due to splash out, filter backwashing or overflow.

Proponents of the technology are quick to point out that this basic scheme solves a number of problems. No longer is it necessary for the pool owner to rely on manufactured chlorine, stored in warehouses and stockrooms, transported over highways and roads, stored again on site and then added to water either manually or by way of some type of chemical feeder system. In effect, the water becomes self-chlorinating; ECGs replicate in a pool the basic process of production that takes place in a factory. This lightens the maintenance burden on the homeowner.

And because the salt chlorination system does not require mass production or transport, proponents also point to the reduced carbon footprint afforded by the technology.

On top of all that, when combined with ORP (oxidation reduction potential) technology, the level of chlorine in the water can be tightly controlled, eliminating peaks and valleys of residuals associated with periodic chlorine treatments.

All of these characteristics fueled the technology's rapid growth and remain potent selling points. Consumers who own pools treated with saltwater chlorine generation are widely known to boast about their "saltwater pools." Many existing pools have been changed over to the technology and in some cases the residual salt content left behind from the use of sodium hypochlorite is enough to charge the system, meaning there is no need for additional salt.

While most ECGs operate as stand-alone systems, some experts believe the future of the technology involves the increasing use of ECGs in conjunction with other treatment regimens in a sort of combined or "cocktail" approach.

This trend has caught on in Europe to a far greater extent than in the U.S. Overseas, combined technologies such as ozone and saltwater systems, or tandems using hydrogen peroxide, bromine and UV are becoming more and more widespread.

Ozone, for example, is a powerful sanitizer and oxidizer but cannot provide a residual. When used with a salt system in combination, the sanitizing residual is maintained, but chlorine can be kept at a much lower level.

By the same token, UV systems kill bacteria in the UV chamber, while saltwater systems augment that action by providing sanitizing and oxidizing action throughout the entire body of water.

The advent of the cocktail approach has also reportedly led to much wider acceptance of the systems in commercial settings. Although many health departments are still reluctant to use saltwater systems, based largely on concerns over the systems' abilities to keep up with chlorine demand when bather load surges, combining saltwater chlorination with a technology such as ozone, which can deliver tremendous sanitizing power quickly, has deflected some of those concerns.

Manufacturers of saltwater systems also note that systems should be sized so their daily operating output level is well below maximum output so that in the case of elevated chlorine demand, the system can be temporarily ramped up via an ORP controller to generate higher concentrations of chlorine.

In any case, as many saltwater pool advocates are quick to point out, we now see many hotels and resorts using saltwater pools as a selling points in promotional material.

Not all of the trends, however, are so favorable where saltwater chlorination is concerned. As is true of most any aquatic sanitizing product or technology, saltwater chlorine generation has run into its share of critics, who point to a range of potential problems.

On the most basic level, there are those concerned about the way that the systems are sold, or more accurately, over-sold. They point to consumers who believe that because they have a saltwater pool, their pool is not chlorinated. Because many people are interested in avoiding problems associated with chlorine, ranging from odor to chlorine byproducts, there is a concern that saltwater chlorine generation has been sold as an "alternative" sanitizer.

Of course, nothing could be further from the truth because saltwater pools produce the same levels of chlorine in pool water as traditionally chlorinated pools.

More troubling still is the perception that the technology is maintenance free. The units themselves require regular scale cleaning, and ECG life span varies greatly between a single year to perhaps five or six.

The system's outputs must be regularly monitored to ensure proper performance, and overall water balance must be maintained to prevent damage to pool surfaces and metallic components, such as copper heat exchangers and stainless-steel filter internals.

Pool water chemistry and maintenance in saltwater pools has been perhaps the most salient concern. Even in the earliest days of the technology, service technicians began noticing that the pH and total alkalinity levels in saltwater pools would rise rapidly, sometimes at rates that were difficult to handle on weekly service.

As pH drifts upward, techs noticed, ORP levels dropped, requiring greater concentrations of chlorine to achieve the same levels of oxidation and sanitation. A solution to this problem has been developed where pH controllers are added to the system to continually add acid as needed to control pH and total alkalinity, but this of course adds cost and complexity.

Perhaps the greatest concern involves corrosion of pool equipment and cementitious or stone surfaces adjacent to the pool. Even the most staunch advocates of the technology acknowledge that saltwater is corrosive and will attack certain alloys, including stainless steel. Their response is to turn to equipment that uses material suitable for saltwater pools, such as filters using polymer components.

Many builders have also reported significant problems with splash out, where the water evaporates and leaves high concentrations of salt behind that damages porous coping or permeable types of stone. Again, proponents counter that the key is to be aware of this issue and select materials that resist damage or to use sealant products to protect surfaces.

The key in all of this, say proponents, is to realize the limitations of saltwater chlorination systems and how to use them properly in terms of chemical balance, equipment selection and materials selection. They claim that any type of chemical treatment program requires management and that there is no such thing as a completely maintenance-free system.

Companies that provide salt for use in these systems will argue that the type of salt is important, because ordinary mill salt can bring impurities that will contribute unnecessarily to total dissolved solids levels. Additionally, chemistry experts from manufacturers suggest using sequestering agents to assist in preventing precipitation of minerals onto plaster surfaces.

The ultimate bottom line, as is true with most technologies and materials associated with bodies of water, is to set reasonable expectations for performance and maintenance with homeowners and commercial pool operators. With appropriate expectations and measures in place, proponents argue that these systems will continue to provide attractive solutions to water-treatment challenges. 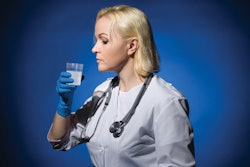 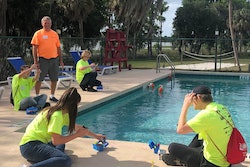 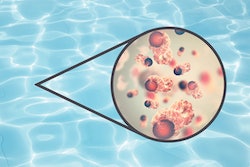 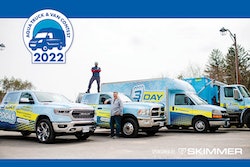 Although demand stayed high and kept service businesses booming, the pandemic’s toughest challenges — namely, supply and labor shortages — bled over into 2022.
May 24, 2022
Service

Pool Bob dreams of life as a superhero pool man. And where’s our holiday?
May 5, 2022
Builder

Just as many employers are getting workers' and related costs under control, the pandemic has introduced new hazards to the regulatory terrain.
April 26, 2022
Chemicals

Chemicals and devices that will help maintain a healthy and clear pool.
April 19, 2022
Winterizing

With spring upon us, it’s time to brush up on the basics of pool openings.
April 14, 2022
Business Operations

Service companies report how they are dealing with the rising prices at the pump.
April 12, 2022
Page 1 of 122
Next Page
Buyer's Guide
Find manufacturers and suppliers in the most extensive searchable database in the industry.
Learn More
Content Library
Dig through our best stories from the magazine, all sorted by category for easy surfing.
Read More