This home was in a state of disrepair until it was given new life with renovations by local design studio Palma.

Based in Mexico City, Palma was founded in 2016 by Ilse Cárdenas, Regina de Hoyos, Diego Escamilla, and Juan Luis Rivera. This project — called San Ignacio — reconfigured the layout of the property, centering everything around a stunning, shallow-edged swimming pool. Palma refurbished the existing building and added two new rooms.

“The newly built [rooms], one closed and the other open, serve as flexible spaces for different activities in the daily use of the house and maintain a constant relationship with the pool placed in the middle of both,” the studio says. A landscape project completed by PAAR “weaves together the existing house and the new additions, mainly through the use of a pavement with buried bricks that seem to disappear as one walks from the house into the garden.”

An old sheet metal roof had long caused problems with heat generation and leakage during rainy seasons. “We replaced it with a concrete slab that provides greater height to the rooms, and the possibility of including a series of skylights that allow more light to enter,” explains the studio.

In addition, Palma installed some short walls to create privacy between the pool area and the new rooms. “These were built resembling the large palm trees found on the site,” the studio says. “They also define a portico with a bamboo roof that bathes the white walls in shadows.” 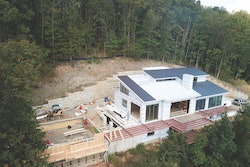 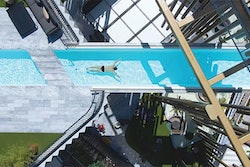 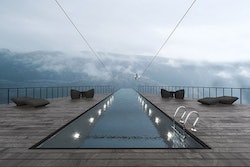 A real estate agent left her career behind to pursue a passion for painting — specifically, colorful visions of swimming pools and other abstract bodies of water.
May 9, 2022
Pools

This beach entry pool, installed for the East Coast Surfing Championships, was built in just three days — and then dug out and hauled away even faster.
April 26, 2022
Pools

How Z Poolforms Can Generate More Revenue for Pool Builders

Amid the rugged landscape of the Cyclades Islands, an unusual residence — with a striking concrete lap pool — emerges from the hillside.
March 31, 2022
Pools

In our February 2022 issue, we published an aerial pool shot taken by German photographer Stephan Zirwes. These additional images from his series, POOLS 2018, were just too captivating to omit.
March 10, 2022
Page 1 of 102
Next Page
Buyer's Guide
Find manufacturers and suppliers in the most extensive searchable database in the industry.
Learn More
Content Library
Dig through our best stories from the magazine, all sorted by category for easy surfing.
Read More