Worth Their Weight in Water | AQUA Magazine

As the drought in the United States worsens and spreads throughout most of the Southwest, more and more counties and municipalities are implementing, or currently weighing, restrictions on swimming pools. It happens every time we enter periods of extended drought, pools are on the regulatory chopping block, and the “rationale” is always the same.

It’s a simplistic view based on bad optics, misinformation and a sort of politically correct prejudice. Quite simply, pools are seen as water-wasting luxury items that can be easily set aside in favor of conservation. After all, no one “needs” a pool, or so the argument goes.

That common set of misconceptions has, in a growing number of jurisdictions especially in California, already led to restrictions on filling new and existing pools, and in the worst-case scenarios, this widespread lack of understanding has resulted in bans on issuing building permits for installing new pools.

This year, with reservoirs reaching record lows, the push to punish pools is more fervent than ever. The good news is that when county, city and water officials listen to the case in favor of pools, for the most part, those arguments do change minds and policy. The challenge is getting that information in front of the right people at the right time.

That’s the uphill battle we’re fighting at the California Pool & Spa Association, and in the situations where we’ve had the opportunity to make the case, the results have been mostly positive. The reason is that when you step back and look at pools in light of water usage and the value they provide to the economy and, indeed, society at large, it becomes immediately obvious that pools are NOT water wasters but, in fact, invaluable assets.

The data has existed for years. Open bodies of water consume 50% less water than lawn and landscape areas of the same surface area. In other words, lawns use twice the water of swimming pools. Water loss in pools is due primarily to evaporation. Independent studies have shown that if the pool is equipped with a solid cover, evaporative loss is reduced by 95%.

Also, when a pool is installed, the project typically includes surrounding deck areas, outdoor kitchens, dining areas and other hardscape features that replace lawns and landscaping. While you may have a 500-square-foot pool, the property may also have four or five times that much surface area covered in hardscape, all of which consumes zero water. That means, in most cases, pool installations dramatically reduce the amount of water used in a backyard.

Pools also act as small reservoirs, conserving water for possible emergencies resulting from water shortages. The vast majority of water contained in a pool is, quite literally, conserved and readily available.

Furthermore, in the growing number of areas impacted by the ever-increasing frequency and severity of wildfires, they can also be used to fight those fires when equipped to do so and in fact, have saved homes from complete destruction.

In that sense, it is fair and verifiable to argue that pools are water savers that benefit conservation efforts. It’s basic commonsense: Pools reduce the impact of drought rather than aggravating it.

There is no question that pool construction and maintenance stimulate the economy. Pools generate employment for tens of thousands of workers across a wide spectrum of skills and income levels.

A single installation supports dozens of jobs for laborers, tradespeople, engineers, designers, drivers and office workers. That same installation uses tens of thousands of dollars of materials and equipment stimulating the manufacturing sector across a broad set of products including plumbing, steel, concrete, and a range of equipment categories including pumps, filters, heaters, automated control, lighting and water treatment systems.

The equipment manufacturing sector alone provides employment for tens of thousands of people and, in turn, utilizes materials and products that are mostly made in the United States.

Those dynamic sources of revenue and employment are completely indisputable and self-evident. Pools are good business that supports the livelihoods of countless people, who very well could wind up on unemployment if pools were excised from the economy.

Once a pool is built, it sustains a vibrant aftermarket in the form of on-going service, chemical treatment, repairs and retail sales — and they do so for decades on end.

And, they increase property values. Although there’s an on-going debate among appraisers whether or not pools add to the bottom line when selling a home, you don’t have to be a financial expert to recognize that if you take two identical homes, one with a pool and one without, the property with a well-designed and installed pool will generate greater buyer interest and a higher selling price than the home with a backyard that is often rarely used.

When considered in full, it’s abundantly clear that pools play an important role in sustaining a healthy economy for people and companies across a wide range of demographics, skill sets and business categories.

This is where swimming pools shine the brightest.

In terms of physical health, the benefits of aquatic activity are all-encompassing. We’ve always known that swimming and other forms of aquatic exercise are good for the human body, but medical research is constantly uncovering an ever broadening number of specific and measurable physical, psychological and even social benefits. We know that swimming is the healthiest form of exercise, and in recent years, we’ve been learning exactly why that’s true.

Exercising in pools can benefit literally everyone. From the most physically compromised person to the healthiest elite athlete, and everyone between. We have the opportunity to improve our health courtesy of swimming pools. In this context, pools are far from a luxury, but an utter necessity for people recovering from surgery, injury or treating chronic diseases such as arthritis, diabetes, obesity, and heart disease.

The examples of the health benefits are vast and inspiring. For example, recent research indicates that swimming leads to the creation of new blood vessels by way of a process called “angiogenesis.” The greater blood flow can also lead to a large release of endorphins — hormones that act as a natural pain reducer throughout the body, which also happens to bring about the sense of euphoria that often follows exercise.

This is a verifiable medical fact for people from young children to the elderly.

As is true of swimming’s physical benefits, we’ve always intuitively known that it improves the way we feel emotionally, and now that innate understanding is being supported by medical research.

On a purely subjective level, we know that vast numbers of people experience positive emotions in the presence of water, and the joy is even greater for those who exercise in water. There is no denying that a love of water is hardwired in the human psyche.

There is now a powerful movement known as “Blue Mind” based on the book of the same name by marine biologist Wallace “J” Nichols, which looks at the science supporting the positive impact water has on virtually all aspects of life in the modern world.

According to Nichols, “We are beginning to learn that our brains are hardwired to react positively to water and that being near it can calm and connect us, increase innovation and insight, and even heal what’s broken. Chronic stress and anxiety cause or intensify a range of physical and mental afflictions, including depression, ulcers, colitis, heart disease, and more. Being on, in, and near water can be among the most cost-effective ways of reducing stress and anxiety.”

Consider that statement in light of the increasing mental health issues we face as a society, including depression, anxiety, paranoia and violent rage. Swimming pools give us a way to combat those often devastating and debilitating ailments.

In a recent study examining the impact of swimming on mental acuity in the elderly, researchers found that swimmers had greater mental speed and attention compared to non-swimmers. Fact is, we are an aging society that benefits from the presence of pools, both in private and public settings.

Finally, pools provide wonderful venues for social interaction and growth. Humans are pack animals that tend to go crazy in isolation. Yet, we live in a time of increased separation from each other, where our primary connection to others is via the internet and other digital platforms, all of which promotes dangerously corrosive sedentary and solitary lifestyles.

Pools change that equation. They are places where families and friends gather for fun and relaxation. Pools promote togetherness and the pleasure of shared experiences. People who grow up in these environments, including both authors of this discussion, commonly say that the time spent in and by the pool are among the most cherished of all life experiences.

They are a magnet for kids and adults alike and, in that way, work as a social adhesive that fosters unity, understanding and love. It is impossible to quantify these benefits, but it’s not hard to imagine the detriment to the human condition in their absence.

All of this is why pools are worth their weight in water.

Scott Cohen is a “garden artisan” and president of Green Scene Landscaping & Pools, a watershape design and construction firm based in Chatsworth, Calif. A widely published author and popular speaker, Cohen is known for his gardens that combine outdoor living with inspired artistic details. He is also chairman of the California Pool & Spa Association.

Eric Herman is editor of WaterShapes Magazine and vice president of communications for Watershape University. He was the founding editor of the original print version of WS, a position he held for 11 years. He was senior editor for AQUA Magazine for nine years. Herman started in the pool/spa/water/ recreation industries in 1989 as associate editor for Pool & Spa News. 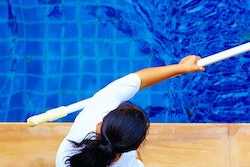 Common Misconceptions About the Pool and Spa Industry

Material selection, when approached correctly, can be an exciting process for both the builder and homeowner alike.
September 22, 2022
Page 1 of 104
Next Page
Content Library
Dig through our best stories from the magazine, all sorted by category for easy surfing.
Read More
Buyer's Guide
Find manufacturers and suppliers in the most extensive searchable database in the industry.
Learn More