The best artists aren’t afraid to color outside the lines. Tracy Lee Stum chooses to draw her own in inventive, mind-bending works of art.

Stum is a “street painter” who calls the street her canvas, using chalk alone to create three-dimensional art. Each creation is a careful study in proportion and scale; the 3-D effect is an illusion that can only be seen from one vantage point.

Given the nature of her art, many of Stum’s artworks create optical illusions of the ground giving way to a fantastic underworld, or perilous bridges over vast canyons. Those who come across her art are encouraged to take a photograph of themselves partaking in the illusion.

Of course, one piece caught our eye. The piece you see here was based on an image of Hollywood icon Rita Hayworth lounging by a swimming pool. Stum created the piece for “Home & Family,” a program on the Hallmark Channel, and did so in less than a day.

“It’s an original composition of a golden era Hollywood star, which I thought was appropriate as I was drawing on the Universal Studios lot,” she says.

While her art may only last as long as the elements allow, Stum’s work definitely makes a splash. 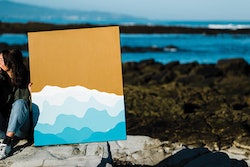 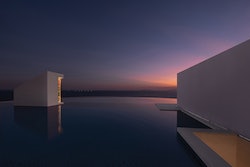