The Cyanuric Acid Debate? Not for Hot Tubs | AQUA Magazine

While the trade continues to debate the pros and cons of cyanuric acid (CYA) for swimming pools, there are a number of studies including a conclusion from the CDC that CYA has no place in a hot tub. Yet many hot tub owners are using chlorine containing cyanuric acid. The result is a buildup of CYA that results in premature draining and refilling, which makes owning a hot tub harder than it should be.

What is CYA and Why is it Used?

CYA (cyanuric acid, also known as conditioner or stabilizer) is a chemical that was first introduced into the swimming pool industry in 1956. Back then, pools were commonly chlorinated with liquid chlorine like sodium hypochlorite or calcium hypochlorite that came in a powdered form. The problem is that chlorine is subject to degradation by the UV rays of the sun and therefore needs to be added once or even twice a day. The loss of chlorine in water to sunlight is 75% in two hours, or a complete loss in four hours.

While trichlor is still a popular choice for chlorinating swimming pools, most hot tubs are chlorinated with dichlor. Dichlor is about 50% CYA. This means that for each 10 ppm of chlorine added to the water from dichlor, the CYA increase is 9 ppm.

In other words, a 300-gallon hot tub adding 1 1/2 teaspoons of dichlor four times a week can build up a CYA level of 50 ppm in as few as four weeks and reach 100 ppm CYA in only seven weeks. Another way to look at it is that each person per hour in the hot tub will consume 4 grams of pure chlorine or 8 grams of dichlor, which is 3.5 ppm of chlorine in a 300-gallon hot tub. Bottom line is that two people using the hot tub two times a week will consume 14 ppm chlorine and increase the CYA by 12.6 ppm per week. More times of use or more people would require more chlorine and have a larger increase in CYA.

CYA buildup and the increase in kill times has led the CDC to issue this statement: "The CDC recommends not using cyanuric acid or chlorine products with cyanuric acid in hot tubs/spas." This was published in May 2016 in a CDC article called "Your Disinfection Team: Chlorine & pH."

The Pennsylvania Department of Health in December 2016 published a statement: "At even moderate levels of cyanuric acid, the amount of time it takes chlorine to kill pseudomonas aeruginosa (the bacteria that causes hot tub itch) can be as much as 100 times as long as in a hot tub or spa without cyanuric acid." This appeared in the publication "Public Swimming and Bathing Places: Operational and Biological Protocol Recommendations."

High levels of CYA have also been known to cause corrosion because it is part of the total alkalinity of the water. When working with the Langelier Saturation Index on balancing water, you have to account for the CYA level. To do that, you subtract about 1/3 of the CYA reading from the total alkalinity reading. The result is your TA may be lower than you think, which could result in corrosive water that is damaging to surfaces and unpleasant to soak in.

The result of CYA buildup in hot tubs is a myriad of negative effects that no hot tub owner wants to experience. Those include cloudy water, bad smelling water, skin irritations and worse. When disgruntled customers look for answers, they are told to add more chlorine to "shock the tub," which only compounds the problem by adding even more CYA. After as little as two months, there's no way for chlorine to recover. Owners are forced to empty their spas prematurely, which leads to frustration and the perception that owning a hot tub is difficult.

Even though the CDC and other scientific evidence says CYA should not be used in hot tubs, most hot tub owners use chlorine. According to PK Data in the APSP 2018 Yearbook, 60% of all hot tubs are sanitized with chlorine, and the chlorine most often used and recommended is dichlor.

Dichlor by Another Name

Dichlor is listed on its container labeling as sodium dichloro-striazinetrione with the added designator of either dihydrate or anhydrous. However, dichlor is also known as sodium dichloro isocyanurate, which clearly calls out the cyanuric acid content of this formula. All disinfectants for hot tubs must be approved by the Environmental Protection Agency (EPA), and they must state the exact chemical ingredients and percentages on the label.

With no need for UV protection, CYA should not be in hot tubs. It causes problems with killing microorganisms by slowing down chlorine's kill times, which could potentially produce unsafe water. It could lead to corrosion or staining, but more importantly, it makes taking care of hot tub water much harder than it needs to be.

Fortunately, there's a way hot tub owners can avoid all of these issues: FROG® @ease® with SmartChlor Technology. It's the only self-regulating chlorine sanitizer with 0% CYA. Users love it because there's no measuring, and it consistently delivers crystalclear water that smells and feels great. Together with FROG minerals, it creates Fresh Mineral Water that kills bacteria two ways: by helping to maintain water balance and conditioning the water for softness. With 75% less chlorine and shocking only once a month with a non-chlorine shock, hot tub owners fi nd it incredibly easy to own a hot tub, and the water stays cleaner longer. To learn more, visit frogatease.com.

Resources for this article: 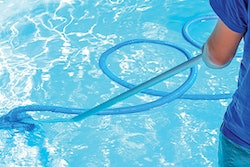 A New Way to Remove CYA? 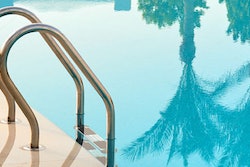 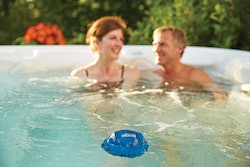