On Monday, April 15, 2019, the Team Horner Group, an integrated manufacturer, wholesale distributor and global exporter of swimming pool equipment and supplies, celebrated worldwide in honor of 50 years in business.

It all started back in 1969 by Earl Horner with three employees and one warehouse. In 1972, Dr. Bill Kent bought into the company and became sole owner a year later. Now, there are nearly 500 employees in 19 locations and customers in over 110 countries. This is quite an accomplishment for Dr. Bill Kent, current CEO of Team Horner Group, who sold the company to the employees in 2016.

On April 15, friends, family and Team Horner employees gathered to celebrate this incredible milestone and the renaming of the Fort Lauderdale Campus to be the Dr. Bill Kent Campus. There was food, smiles and even an authentic 1969 ice cream truck, which was brought in from New York specifically for Bill and Mike Dooley, the president and COO of the Team Horner Group.

The 50th anniversary was also recognized by the City of Fort Lauderdale, which proclaimed April 15 as Dr. Bill Kent and Team Horner Day. Many congratulations are in order for the Team and, as Bill proudly says, “The Best is Yet to Come!” 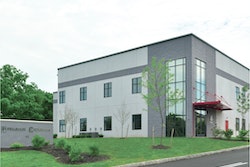 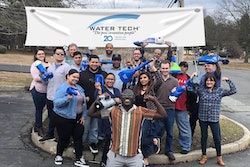 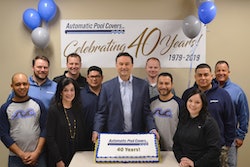 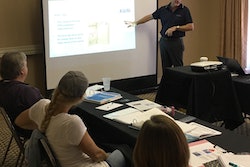 Four decades ago, Pegasus Products began a steady ascent to success in the vinyl-liner and cover business.
June 21, 2022
Anniversaries

Water Tech Corp, manufacturer of the original Pool Blaster, Volt and Precision battery powered pool cleaners is celebrating its 20th year in business this season. Guy Erlich founded Water Tech Corporation in 2001 in an apartment building in New York City and has helped the company find success in the competitive pool and spa cleaner arena ever since. The company now operates out of a large facility in E. Brunswick, New Jersey with more than 20,000 sq. ft. of space.
September 14, 2021
Anniversaries

JED Pool Tools, manufacturer of swimming pool maintenance equipment and accessories, celebrated its 30th anniversary with a party for its employees this month. JED Pool Tools has been making high-quality pool tools and pool accessories in the USA for 30 years.
April 21, 2020
Anniversaries

PoolAndSpa.com Celebrates 25 Years on the Internet

PoolAndSpa.com, a Florida based online retailer of swimming pool and hot tub parts and supplies, is clebrating 25 years in business on the internet.
November 25, 2019
Anniversaries

Automatic Pool Covers Inc. is celebrating 40 years in business in 2019. To celebrate, the company held a party in late February to thank their employees and clients for getting the company to this big anniversary.
April 16, 2019
Anniversaries

Franklin Electric Co., Inc. in Fort Wayne, Ind. is proud to announce 2019 as the company’s 75-year anniversary. A lot has changed at Franklin Electric since E.J. (Ed) Schaefer and T.W. (Wayne) Kehoe founded the company in 1944 in Bluffton, Ind. Since then, it has grown from a small motor manufacturing company into a leading global provider of systems and components for moving water and fuel. What hasn’t changed are the company’s core values. Franklin Electric remains focused on its customers and dedicated to delivering on its key factors for success. 2019 will be a celebration of all the company has accomplished in many places and for many customers around the world.
February 19, 2019
Anniversaries

Raypak celebrates its 70th anniversary with the the grand opening of a new state-of-the-art Innovation Learning Center at the company’s headquarters in Oxnard, Calif. The center is part of an extensive renovation and expansion of Raypak’s headquarter offices, testing lab and warehouse.
October 16, 2018
Anniversaries

Kalamazoo Outdoor Gourmet is celebrating the 20th anniversary of its Hybrid Fire Grill, which allows homeowners to cook with any combination of wood, charcoal and gas.
April 10, 2018
Page 1 of 2
Next Page
Buyer's Guide
Find manufacturers and suppliers in the most extensive searchable database in the industry.
Learn More
Content Library
Dig through our best stories from the magazine, all sorted by category for easy surfing.
Read More