While outdoor pools in upstate New York are covered with snow most Januarys, that doesn't put a stop to outdoor fun. Some folks in Champion have been building giant snowmen for the last few years, and this January, they built their biggest yet — towering at 35 feet.

Vernon Scoville, a dairy farmer and one of the builders, says he and about 50 others built the snowman, named B.A. Snowman, one Saturday in January, starting at 11 a.m. and going till 8:30 p.m. They used a 24-foot-round aboveground swimming pool as a form in the building process, narrowing it up as they raised it to the next levels.

Trucks with dump trailers hauled snow in from the fields, and the snow then got blown into a hay elevator, which delivered it into the swimming-pool form. "This makes it packier," says Scoville.

"This is the first year I made the hat," adds Scoville, who took apart an old 18-foot-oval aboveground pool and then put it back together to form B.A.'s hat. "Then we painted it black."

B.A. also sported car tires for buttons, oil barrel lids for eyes, a road cone for a nose and red sheet for a scarf.

While B.A. is not the tallest snowman on record, he did get a lot of attention. Says Scoville, "CNN picked it up, and I heard they had it up over in London and Hawaii. It was on an L.A. newscast, too. The kids love to stop and see it. I had school buses of kindergarteners come to get their picture taken with it." 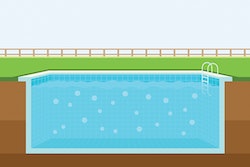