Just as the design of automatic pool covers has evolved over the past two decades, so too has the process by which they are installed.

“What’s changed the most, besides a few product changes, is the switch to cover manufacturers training builders to install their own products,” says Dan Hayes, owner of Luxury Mountain Pool & Spa in Idaho Falls, Idaho, whose first job in the industry was working for a pool cover distributor and who now does his own cover installations on the pools he builds. “That’s been a long and slow leap forward.”

Depending on where in the country builders operate — and the availability of automatic pool cover installers — that forward momentum is still in mid-leap. “The problem with where I’m located, and it’s the same for probably 70% of the pool builders I know, is we’re too remote to have a professional come in and do the cover installation for a reasonable price,” Hayes says. “Where I work, it can be a three- to eight-hour drive one way, so it’s not cost effective for them or me.”

That’s the issue in sparsely populated regions, but for Stefano Cameresi, owner of WestCoast Pool Covers Inc. in Anaheim Hills, Calif., there are plenty of install jobs to keep him busy as a subcontractor for pool builders. In his experience, many builders (especially those who work with gunite) prefer not to handle pool cover installations on their own. And with more cover specialists operating on the West Coast than in other regions, hiring out for the job is easier and more cost effective for builders than taking on the added work themselves.

Regardless of who installs the automatic pool cover, the result must be perfect. Which is why Hayes and Cameresi both emphasize that communication between all parties involved is critical throughout the entire project.

Almost half of WestCoast Pool Covers’ business comes directly from homeowners, many of whom want to add a cover to an existing pool. Cameresi offers free online estimates in which potential customers are asked to fill out a form that includes photos of various cover options from which they can choose. They also need to indicate whether the cover is for a new or existing pool, include the pool’s dimensions and attach pool images or plans.

“Then we send an estimate based on that information, so the homeowner will have an idea of how much the cover is going to cost and if it fits their budget,” Cameresi says. “Sometimes, they have unrealistic expectations about what they think they’ll spend. In that case, [without the online form] I would have driven to the house for something that wasn’t going to happen.”

Once the homeowner indicates interest, someone from WestCoast Pool Covers makes a site visit to confirm the pool’s dimensions, determine electrical hookups and review cover options (style, colors, track placement). That person then provides a revised on-the-spot estimate. “At that point, we just let them decide,” Cameresi says. “If they want to sign right away, they can. If not, we ask them to let us know when they’re ready. There’s no pressure. It’s all about educating the homeowner and giving them all the information they need to make them feel comfortable purchasing the product and our services.”

The process is similar when WestCoast Pool Covers is hired by a builder as a subcontractor. Cameresi does strong repeat business with a core set of builders, but others find him the same way homeowners do: online. “If we sell to a pool builder, the builder gets our estimate and then adds his markup when he sells the project to the client,” he says. “But homeowners with new builds are getting smarter and will shop directly for a pool cover, so they get an estimate from us. They already have a number in mind for the cover when they hire a pool builder.”

Homeowners who don’t want to pay the builder’s markup instead contract directly with WestCoast Pool Covers, which charges the same amount regardless.

All that said, there are rare situations in which a pool cover simply might not be physically or fiscally feasible, according to Hayes. Those situations can include pools with a raised wall or rock features. For the most part, though, selling an automatic pool cover in 2022 is a lot easier than it was in 2002. Many installers can work around obstacles, such as slides or other features, especially if they know about them ahead of time. Consumers also are more keenly aware of the safety and energy savings benefits of the product than they used to be, and automatic pool covers often sell themselves.

But that doesn’t mean they shouldn’t be part of the initial sales discussion. “I offer them as an option, and I can design a pool around the pool cover if I know it’s being installed,” Hayes says. “So, I always talk about covers from the very beginning of the process.”

As part of that discussion, it’s important to be as upfront about a cover’s cost as possible. “I see that some builders will just sell the cheapest type of system or the cheapest components,” Hayes says. “I’ll come to a million-dollar house with this nice pool, but then it has just the standard ugly aluminum lid on it. That’s one detail that the builder should have known to customize with a walk-on lid that matches the deck.”

If Hayes is contracted by a homeowner to do service or maintenance on a pool with a less-thanadequate cover or cover box, he’ll often suggest an upgrade when it comes time for a replacement. “I had a salesman tell me once that you want to sell to the homeowner’s expectations, not your own,” Hayes says. “So if I’m a penny pincher, I don’t want to sell something that I would put in my backyard — as a penny pincher — to someone who wants to build a big, fancy custom pool. I want to sell them what they’re looking for. And sometimes the builder who’s selling them the pool cover may not even tell the homeowner that there are different options.”

Once a homeowner has committed to an automatic pool cover, it’s up to the builder (or the builder and cover installer in tandem) to deliver on the product’s promise. That can be accomplished by following these three strategies:

1. Envision the finished product. Everyone involved with the project must be able to see the installed automatic pool cover and how it operates in their mind’s eye before the project even begins. Use technical drawings to remind yourself and everyone else involved with the project how the cover is supposed to look when it’s complete. Then make sure each step in the construction process leads to that finished look, Hayes says.

Failure to diligently examine the specs for each case can lead to trouble, Cameresi adds. “Sometimes a pool builder may just glance at the information you’ve provided or go off the specs he remembers from another pool cover vault. They just go with what they know, which is pretty common in this industry, and that’s when you have mistakes.”

Cameresi and Hayes suggest that all subcontractors working on the  project be aware of the automatic pool cover’s specs from the get-go, because a miscue on their part could result in issues when it comes to installing the cover — ultimately delaying the project’s cowmpletion and leading to unnecessary added expenses.

2. Pay attention to details. “The number one thing is to make sure that the pool is being built or installed level and square,” Hayes says. Sounds simple in theory but not so easy in practice. “Make sure all your measurements and elevations are correct. If you’re installing a cover on a shotcrete pool and shotcrete cover box, I wouldn’t leave a shotcrete crew on their own. I’d supervise the shotcrete process.”

Common oversights include simple mistakes in executing the cover box or vault. “One of the main problems we see is the vault not being up to spec,” Cameresi says. “It might not be wide enough, or it might be missing electrical or a drain. There are things that even a builder that has experience can miss, even when we provide detailed plans.”

Both Cameresi and Hayes recommend paying attention to such key design details as offsets for recessed track systems. “If you don’t do that, your motor could be too close to a wall, making the full cover inaccessible,” Hayes says. “Or when you’re trying to create the dimensions for the pool cover around a free-form pool, if there are objects — handrails, a slide, a ladder — in the way, you’re going to have problems installing that pool cover.”

3. Communicate the entire time. While automatic pool cover installers strive to keep projects on track by informing pool builders of their specific needs, Cameresi encourages builders to do the same for them. “Sometimes, they don’t even tell us if they get a contract or not,” he says. “We’ll get a call saying they’ve already started a pool and they need cover tracks installed right now. We have to ask builders to make sure they contact us if they want to work with us.”

Even projects in which the pool cover installer is hired directly by the homeowner — not subcontracted by the pool builder — require at least a moderate level of communication, according to Cameresi. “There are specific items that we ask the pool builder to take care of, like building the pool cover vault, doing the electrical, taking care of the drain. It’s outside our scope of work, because we just install the pool cover,” he says. “When the homeowner hires us directly, and we don’t have communication with the builder, that’s when information gets missed.”

'THERE IS NO SILLY QUESTION'

The process behind the process of installing an automatic pool cover doesn’t have to be complicated or stressful, especially when builders, homeowners and installers are all on the same page.

“It’s really about the relationship between the person that you’re providing a service to and you,” says Cameresi, who began his career as a pool builder. “The main advice I have for builders is even if you have installed pool covers before, be open to learning more. Keep the lines of communication open with the pool cover company, because there is no silly question.”

Hayes seconds that advice, while also offering a suggestion of his own to builders who aren’t able to easily subcontract with cover installers. “Don’t talk customers out of buying a pool cover because you’re not comfortable with [installing covers],” he says. “Go and get trained — training is available — and then make sure you do a quality job. Don’t be scared of it.”

This article first appeared in the February 2022 issue of AQUA Magazine — the top resource for retailers, builders and service pros in the pool and spa industry. Subscriptions to the print magazine are free to all industry professionals. Click here to subscribe. 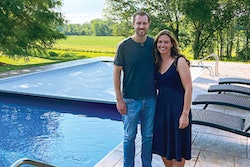 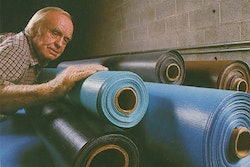 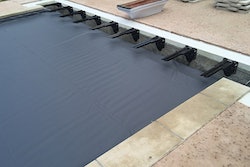 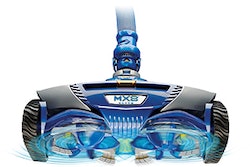 Two automatic pool cover installers, on opposite coasts of the United States, solve challenges unique to their locations.
August 23, 2022

Just as the design of automatic pool covers has evolved over the past two decades, so too has the process by which they are installed.
February 22, 2022
Page 1 of 1
Buyer's Guide
Find manufacturers and suppliers in the most extensive searchable database in the industry.
Learn More
Content Library
Dig through our best stories from the magazine, all sorted by category for easy surfing.
Read More