Elevate the Customer Experience With The Attendant | AQUA Magazine

Today’s pool owners are savvier than ever, especially when it comes to technology. They live in smart homes where everything from the HVAC system to the kitchen oven is automated, and they’re increasingly looking for the same user experience outdoors with their swimming pools and spas.

That kind of automation sophistication has made Texas pool owner Chris Brown a fan of The Attendant — a new universal control system developed by New Hope, Pa.- based Poolside Tech. As a newcomer to the pool business, the company is seeking to advance the industry’s automation capabilities and elevate the customer experience.

“I was immediately drawn to The Attendant — from the GUI [graphical user interface] to how it looks and feels,” Brown says.

The Attendant is a cloud-based automation system that continually monitors pool equipment (regardless of manufacturer), as well as water quality and temperature, to determine the most energy-efficient way to have the pool ready when the homeowner wants to use it. Its panel is installed with the pool and spa equipment, and links with a smartphone like other automation systems. But The Attendant’s software goes further, providing an interface and applied intelligence to help it think and communicate effectively with both homeowners and service providers — who use it as a monitoring tool. 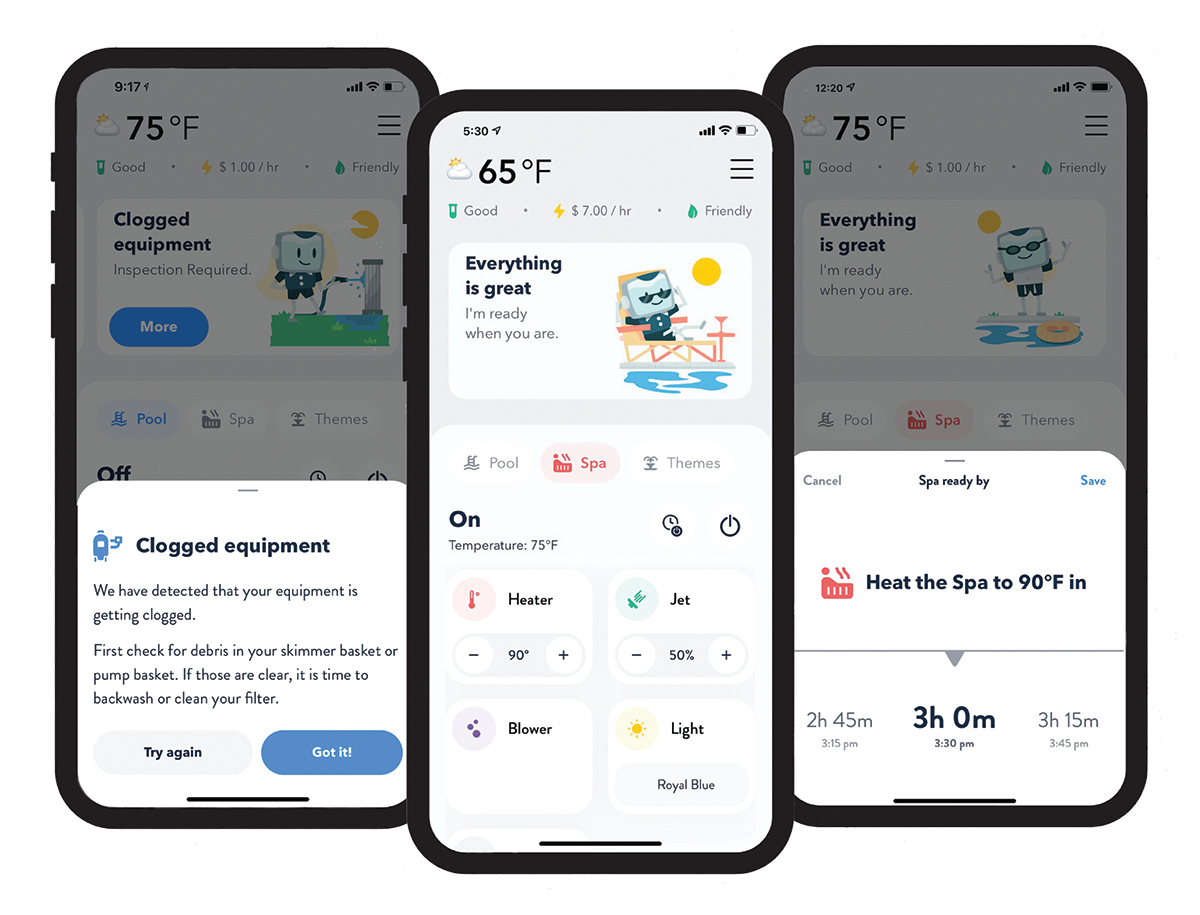 Additionally, The Attendant’s energy-saving capabilities are designed to match those of automation technologies in other industries and are among the product’s most powerful features.

The pool owner’s current energy rates are entered into the app during the initial configuration process or, if preferred, a national average can be leveraged as a default. From there, the performance of each component will be analyzed and recorded.

The Attendant will report energy consumption as well as the associated costs for both electricity and gas. Equally important, the values are also shown by device type. The Attendant even has an Airbnb mode, which allows the pool owner to grant limited access to other pool users such as guests and teenage children. The system can restrict a user’s profile to specific pool features as well as a maximum set point for heating events, thereby avoiding careless spending.

Fortunately, for pool owners like Brown, there are pool builders like Mark Gilbaugh, owner of MedHawk Pools & Patio LLC in Celina, Texas, who has wholeheartedly embraced The Attendant. In fact, Gilbaugh’s first installation of the product — which now comes standard with his projects — was on Brown’s pool. The builder had previously equipped it with a different manufacturer’s control system, but once Gilbaugh was introduced to The Attendant by his lighting supplier, he offered Brown a free upgrade.

“Before I could even download the other app, Mark contacted me and said, ‘Hey, we have this new app that will run everything — I think you’ll like this system better,’” says Brown, who owns a home theater installation company in the Dallas-Fort Worth market. “I’m a techie, and I saw all that The Attendant can do, including ease of use and the color palettes with the lights. We had a pool party for July 4 and had the lights fading out between red, white and blue, which I really liked. I also can see what the pool will cost me per year, because of the calculations it can do.”

“This is all about the experience,” says Gilbaugh, a former software engineer who now is leveraging The Attendant to differentiate himself from the competition in North Dallas. “For the customer and the maintenance provider, the experience is better for both. The best user experience comes in the form of insight, predictability and action.”

And that’s exactly what The Attendant delivers.

It manages chemistry levels and automatically dispenses chemicals to automate pool maintenance, and it is the only automation system on the market that leverages the weather forecast along with the historical performance of a pool to predict when to activate the pool’s HVAC system — thus saving the pool owner money by not running it unnecessarily. The controller takes into account factors, such as ambient temperature, wind speed, UV index and cloud cover, and the smart temperature controls allow a user to specify the time at which the pool will reach a desired temperature — leaving the determination of the exact minute to fire up the system in the hands of The Attendant, not the pool owner.

There’s never been a better time for pool builders to embrace the kind of technological change The Attendant brings to the pool industry.

“This industry has been stuck in the 1980s,” says Gilbaugh, especially when it comes to automation technology.

A design center in the MedHawk office includes a technology area that allows potential customers to try out all of the industry’s leading pool control systems (including The Attendant) and evaluate which user experience is the most ideal for them.

“Pool owners want a seamless experience,” Gilbaugh says. “You turn on the pool, and it works. But sometimes they don’t know how bad other user experiences can be. I’m providing a simple education for them: We’re all pool builders, and we’re all going to build a pool for about the same price — because gunite costs what it costs, and rebar costs what it costs. But what I can do for a similar price as the other builders is give you a better user experience by equipping you with this product.”

What Else Does The Attendant Offer?

Since The Attendant hit the market early last year, Poolside Tech has made continuous improvements to the product. Here are five of the biggest: